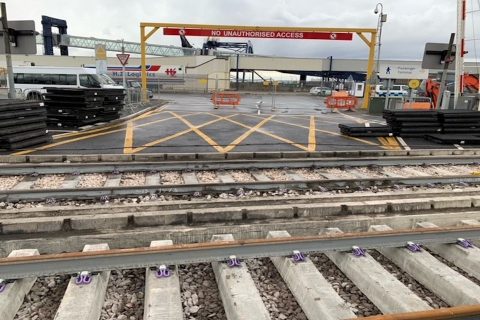 Harwich, the sister port to Felixstowe and partner in the Freeport East bid, has had its rail access upgraded to cope with growing demand. Reliability improvements have been made on the port branch line, following track renewals and maintenance carried out by Network Rail. Harwich and Felixstowe respectively sit on the south and north banks of the confluence of the rivers Stour and Orwell. Felixstowe has grown as a container port because of its deeper berths; Harwich benefits from a more sheltered bay, which favoured its ferry operations.

Bulk traffic is driving growth at Harwich, the post on the Essex (south) side of the Stour-Orwell river mouths. In a welcome renewal, track, sleepers and ballast have all been replaced by Network Rail, the UK infrastructure manager. The works are all part of a planned programme of upgrades to improve reliably. The month-long works started on the 10 January and have just been completed. The operators of both Harwich and Felixstowe, Hutchison Ports, recently announced a joint bid for one of the UK government-sponsored freeports, dubbed ‘Freeport East’.

Network Rail say the works were necessary for safety and reliability, Undoubtedly they will also help increase the attractiveness of the Freeport East bid. The renewals, which take the spotlight away from the ongoing programme of works to upgrade rail access to Felixstowe, emphasise the co-operative nature of the two ports. The joint bid comes at a time when collaboration between ports is in the news. Just last week, the Belgian ports of Antwerp and Zeebrugge announced a formal collaboration, backed by efficient rail freight connections. There is a historical connection too. Zeebrugge and Harwich have for many decades been connected by mixed traffic ferry routes.

The length of track renewals was quite modest. Around 400 metres was replaced near Harwich International passenger station. Nevertheless, sleepers and around 600 tonnes of ballast were replaced. Critically, the surfaces at three level crossings were also renewed as part of the work, to prevent issues with the track-road interface. Grade separation in the area is difficult due to the low lying, level landscape.

Network Rail say that just like road surfaces, track gets worn from constant use every day. “Engineers carry out inspections and repairs regularly but over time the track becomes so worn that a full replacement is the only option to avoid speed restrictions that cause delays and cancellations”, they said. Ellie Burrows, who is the Network Rail route director for Anglia, highlighted the benefits for rail freight customers. “We’ve renewed the track on the Harwich branch line to keep everything in good working order for our passenger and freight customers”, she said. “Track renewals are essential to reduce the number of delays and cancellations caused by faults, enabling goods to arrive on time.”

Harwich was formerly the most important port on the east coast of England, primarily because of its ferry traffic. However, it is growing once again. The impetus this time is bulk cargo, which helps support the construction industry in the south east of England and London. Felixstowe’s huge growth as Britain’s busiest container port has overshadowed its neighbour, but these track renewals go someway towards redressing the balance.