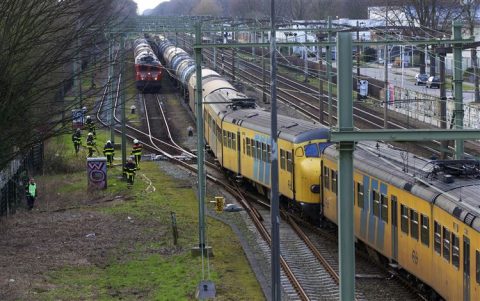 The Dutch Public Prosecution Service has demanded a fine of 7,500 euros for DB Cargo in court on Tuesday. This is because of a train collision with a passenger train at Tilburg station on 6 March, 2015. According to the judiciary, the carrier failed to report the correct length of the train to infra manager ProRail, which is partly responsible for the accident. The driver of the passenger train was also prosecuted. He passed a red signal.

In the accident, a passenger train ran into the parked freight train. It was on a track which was too short for the length of the train. Tens of travelers were launched through the train, seven were slightly injured. After the collision, the combustible substance butadiene leaked from the rear wagon. As a result, two officers became intoxicated.

The freight train stopped in Tilburg because it was picking up another driver. Because the correct length of the train was not known, it was put on a track that was too short. A spokesperson for DB Cargo said that the correct length had been communicated by telephone to railway manager ProRail. “You could make adjustments in the system up to five minutes before departure. After that you had to make an additional phone call. Those were the rules, and we had received permission by phone.” The company’s lawyer therefore also pled acquittal.

The prosecutor did say that the accident could have happened because of a chain of errors among several people. The train driver was also prosecuted. He ignored a red signal. His case has been withdrawn partly for medical reasons and is being settled out of court.