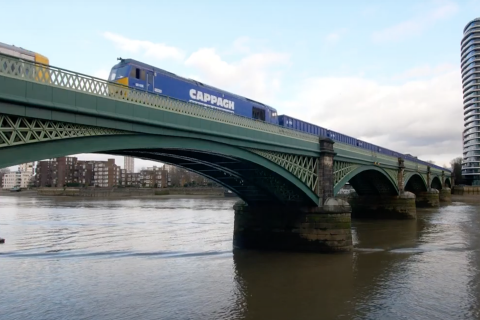 Specialist bulk transporter DC Rail has collaborated with HS2 to produce a video, anticipating the freight industry benefits of the huge UK high speed rail project. The Midlands based operator supplies London construction projects, and competes for space on the heavily congested West Coast Main Line. They say the paths freed up by HS2 will transform not just their operations, but the UK economy at large.

With their operational headquarters in railway city of Derby, DC Rail, part of the Cappagh construction group, are at the heart of UK innovation in the rail industry. They are also on the doorstep of the HS2 high-speed rail project, and it is that innovation which is a crucial part of the company’s forward planning.

In order to minimise the environmental impact of their operations, Cappagh Group’s own rail freight operating company, DC Rail, moves much of their long-haul construction materials. London customers are their foremost recipients, as the building boom shows no sign of abating.

To better serve that market, and win additional share, the company is currently making a multi-million pound investment in a new rail freight terminal at Wembley, in north west London. Sited in the shadow of the famous stadium arch, and connected directly to the West Coast Main Line, the facility will help Cappagh offer new rail services to customers in London, as long as they can secure capacity on the main line. It is that latter piece of the jigsaw that HS2 is destined to fill.

The new short video, ‘HS2: Greater capacity for rail freight’, features DC Rail, and their director of rail, David Fletcher, on site at the Wembley terminal. “Using the rail network to move goods is vital in order to take lorries off roads and reduce carbon emissions in Britain”, says Fletcher. “We are committed to expanding our operations, demonstrated by our investment in Wembley, but it is the arrival of HS2 that will be vital as it will provide more space on Britain’s railways for us to do more.”

HS2 has reiterated its contribution to the rest of the UK rail network. “The West Coast Main Line is the busiest mixed-use railway in Europe and is effectively full, meaning there is a lack of additional space to run more freight services on it”, says an HS2 statement. “Building HS2 frees up a massive amount of space on the existing railway by placing high-speed services on their own pair of tracks.

Once HS2 is operating, services can run much closer together, meaning there can be more train paths to be used by freight services.”

DC Rail is among the operators already using the limited freight slots available to move construction materials. London is the single biggest construction market, and at the hub of the busiest lines in the UK, there is a clear bottleneck, which is suppressing modal shift.

“The West Coast Main Line is the busiest mixed-use railway in Europe, with a mix of fast, stopping, commuter and freight trains”, says Fletcher. “The construction of HS2 will allow fast passenger trains to operate on their own dedicated railway. This will free up additional capacity to allow more freight trains to be run.”

With almost 60 per cent of construction materials still delivered to London by road, Cappagh clearly has their eyes set on some of those vacated paths for their own movements.

Taking heavy traffic of the congested roads around the capital will be welcomed by most Londoners. “HS2 will unlock much-needed capacity on the West Coast Main Line, and eventually on the East Coast and Midland Main Lines as well”, says Ben Rule, the infrastructure management director for HS2 Ltd.

Combatting climate change has long been a mainstay argument in favour of rail freight, and also a key part of the message from HS2. “Additional space can be used by both passenger and freight services”, says Rule. “That will reduce car and lorry journeys, reducing the amount of carbon emitted by transport, and helping Britain reach its goal of net zero emissions by 2050.”

The Cappagh Group Wembley terminal will be ready long before HS2 becomes operational. It may well play a significant role in the construction of the line. It may never be as famous as the stadium next door, but for the future economy of the UK, it will be every bit as much a cup winner.