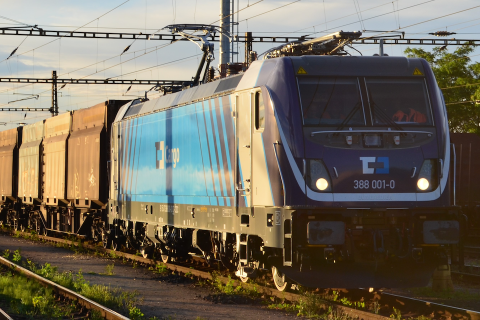 Manufacturer Bombardier has supplied ČD Cargo in Czechia, formerly the Czech Republic, with the first two Traxx MS3 locomotives of a substantial order. The bi-mode variant is the first locomotive to meet the new stringent Czech Electromagnetic Compatibility requirements.

ČD Cargo, the freight operator spun out of the state-owned Czech Railways in 2007, has ordered up to 50 Bombardier Traxx MS3 locomotives for general duties across the network. The first two have entered commercial operation, with a series of trails underway.

Traxx is the well-stablished locomotive design, based on a modular platform. A number of variants have been produced since their introduction in 1996. To date, Bombardier has manufactured over 2000 units. The MS3 is the latest generation of the multi-system locomotive, equipped with a last-mile capability to bridge non-electrified track sections, such as ports or freight terminals.

The order was placed almost two years ago, when ČD Cargo stated its intentions to deploy the locomotives for freight and passenger duties across its domestic network. The operator intends to deploy the versatile motive power also in Slovakia, Germany, Austria, Poland and Hungary. Ivan Bednárik, the ČD Cargo chairman, said the new locomotives would be the most modern in the fleet.

With delivery underway, Bednárik restated their intentions to offer customers additional services. He said the power and efficiency of the design would allow ČD Cargo greater commercial scope. “We are also proud to be the first ones to operate the Traxx MS3, the first locomotive to be fully compliant with the new Czech Electromagnetic Compatibility standard, which is one of the most stringent in Europe”, he said. “This recently achieved authorisation shows that our new locomotive is at the forefront of modern rail vehicles in Europe.”

Bombardier is equally pleased with the results so far. “Our Traxx 3 platform is our latest product development in the locomotives segment”, said Tomáš Holý, regional representative for Bombardier. ”The vehicle addresses our customer’s need for a forward-looking product based on a proven platform.”

To date, more than 2000 Traxx locomotives are at work in 20 countries. According to Bombardier they cover a combined distance of 300 million kilometres per year. The contract between ČD Cargo and Bombardier has a first call-off order for 10 locomotives. The new traction will allow the ambitious operator to build upon their current portfolio, which carries around 65 million tonnes of goods annually.

Bombardier already has significant business interests in Czechia. It is the second largest rolling stock manufacturer, with around 1300 employees at its Ceska Lipa site in the north of the country.

The headline picture shows the first locomotive, designated by the operator as Class 388 001 at work near Mondi Hněvice, halfway between the German border and Prague (Photo: Pavel Polak).