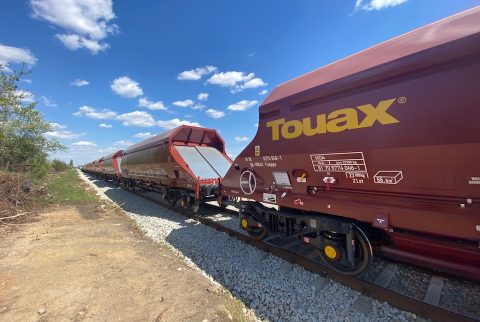 Twenty brand new hoppers built to UK specifications have arrived in the country. This represents the second to last installment of 95 brand new wagons for Mendip Rail, the aggregates specialist in the west of England.

Touax Rail, the UK arm of the operational leasing corporation Touax Group, has just signed over a consist of twenty Greenbrier HOA aggregate hopper wagons to Mendip Rail. Once inspected, tested and approved, they were sent for immediate operational deployment to quarries in Somerset.

The new rolling stock has a familiar look, incorporating all the latest from an established design. “The wagons represent the penultimate part of a fleet order from Mendip Rail’, says Andy Le May, the sales and marketing manager for Touax Rail in the UK. “The remaining twenty wagons are due to arrive in the UK in the next week.”

Making it seem very much as straight-forward as a pre-delivery inspection that a new car buyer may expect, Le May was quite confident that the rolling stock would be dispatched, ready to go. “Greenbrier are building the hoppers at their Świdnica plant in Poland. They are designed for the UK market, and tried and tested. We have a good, reliable relationship with the manufacturer, so I am expecting everything to run smoothly.”

Wagony Świdnica, is a well known and historic employer in the south western Polish community. The complex on the southern edge of the town has been part of the local scene for almost a century, and part of Greenbrier for over twenty years.

Apart from a hiatus during the Second World War, they have been producing rolling stock continuously at the plant, commissioning over 110,000 wagons to date.

The HOA design has become quite familiar on the UK rails. The wagons are optimised for the aggregates loads, and they will spend their operational life working from the quarries of partners Aggregate Industries and Hanson Aggregates, deployed from new to their Somerset base.

With demand for raw construction materials showing no sign of easing, they should remain in busy use for years to come. “We delivered fifty-five box wagons earlier in the year”, says Le May. “These forty hoppers represent the balance of that order.”

DB delivered the wagons from Greenbrier’s Wagony Świdnica works to holding in Wembley, north London. However, that company recently handed over their contract to operate for Mendip Rail to Freightliner, who have just entered their eighth month in charge.

Freightliner have said they expect to handle around eight million tonnes, or approximately 107,000 annual wagon-loads of aggregates for Mendip Rail. All of that will be bound for terminals in London and the Southeast of England. To make a start on that, Le May expects the final 20 hoppers to be delivered to their new base in Merehead next week, ready for sign-off.

Given the pace of construction in and around London, none of the fleet will be out in the countryside for very long.

What a shame they were built abroad and not in the UK. Buy British & support our economy.