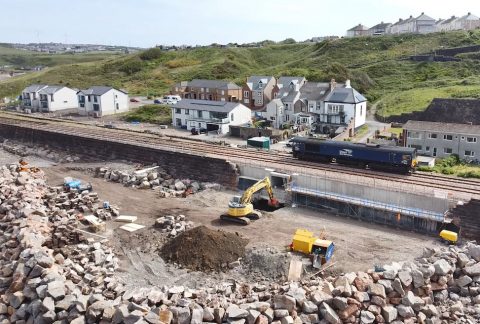 Ever since a series of February storms battered the British Isles, infrastructure agency Network Rail have been on site at a major breach to sea defences around the village of Parton on the exposed Cumbrian Coast. For the past eleven weeks the railway between the towns of Whitehaven and Workington has been closed, effectively cutting in half the Cumbrian Coast Line, which connects Carlisle in the north with a route to Carnforth near Lancaster in the south, in a long loop of around 100 miles (160km).

The line was formerly the backbone of an extensive network of inland routes into the Lake District, and also served fishing and coal mining interests. More recently, freight has served heavy industry, including steel manufacture and ship building. The line currently serves the nuclear power and fuel reprocessing plants at Sellafield and Drigg, just south of the breach. Trains carrying flasks of radioactive materials from locations in the north have been required to detour via the congested West Coast Main Line.

The extent of the damage to the tracks is made apparent by the necessity to add over 36,000 tonnes of rock armour to the sea defences at the site – work which was, ironically, planned for this year. Network Rail say their teams have now successfully replaced the damaged underpass beneath the railway, strengthened the sea wall and re-laid the track.

Teams are expected to be on site for four more weeks to finish works. “The scale of the storm damage on the railway at Parton was significant”, said Phil James, North West route director for Network Rail. “I’m pleased that the Cumbrian Coast line is now available for essential passenger and freight services.”

Given the current coronavirus crisis, the winter storms in the UK – the worst in living memory – have been off the headlines. However, Parton is just one site among many that have been a real headache for infrastructure engineers during the last three months. Flood damage affected many other locations too, including the line to the power station complex at Drax.

There’s still more to do on the exposed coastal route. Later this month planned closures will be required to renew track sections.

The line was most famously in the news eleven years ago, when extensive flooding cut off the town of Cockermouth, just north of the works at Parton. On that occasion, the railway was the only communications corridor left intact, and a temporary station was erected to serve the community.