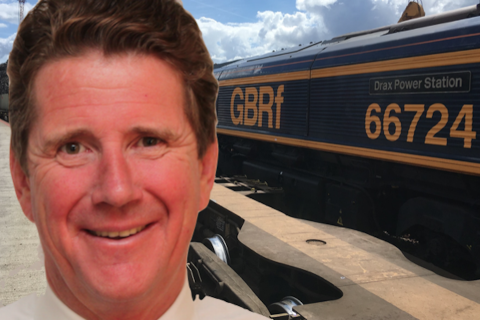 UK operator GB Railfreight, and their managing director John Smith, is celebrating a renewed contract with a construction industry manufacturer, which will see their partnership extend for another three years.

Gypsum is a versatile material, with uses in agriculture, construction and even decorative arts and foodstuffs. It is mined, by-produced, manufactured and consumed in the UK. Most relevantly, it is moved by rail freight in large quantities, everywhere from Fort William to Falmouth, almost. Not quite as ubiquitous a cargo as king coal once was, but even in these times, it is not difficult to find a gypsum train on the move. From building materials to beer additives, gypsum can get you plastered, and plastered, apparently.

So, it is no surprise that GB Railfreight has been raising a glass to a renewed contract with Etex Building Performance, who use the versatile material for the manufacture of plasterboard products at the company’s Ferrybridge facility in West Yorkshire. They are not licensed to brew beer, we think.

The contract renewal will keep trains arriving at the factory gates until at least the end of July 2023. GBRf has been working with Etex for five years already, transporting gypsum from Cottam and West Burton power stations, to Etex plants in West Yorkshire and at Portbury, near the company head quarters in Easton-in-Gordano, Bristol.

John Smith, the ebullient managing director of GB Railfreight said the continuation of their partnership with EBP demonstrated effective rail freight solutions. “As an industry, rail freight works hard to support the efficient movement of goods for the UK supply chain. GB Railfreight is proud to help to keep this country’s construction sector moving”.

Although occurring naturally, and being extensively mined worldwide, including in the UK, gypsum is also a byproduct of conventional electricity generation and industrial fossil-fuel consumption. A chemical reaction with limestone, to remove sulphur dioxide emissions, produces the compound in large quantities. A brief search for the material will reveal many company names familiar to the construction and agricultural sectors.

“EBP is proud to be working collaboratively with GBRf”, said Paul Brown, representing Etex. He went on to express his respect for GBRf as a commercial partner in delivering service needs to operational facilities. “This in turn has ensured that EBP is able to deliver on the promises to our customers, which will be more prevalent given the current market dynamics”.

This contract has been renewed in the face of a continued downturn in the conventional power generation industry. The decommissioning, last year, of Cottam Power Station in Nottinghamshire and the reduced activity at West Burton in neighbouring Lincolnshire, resulted in a reduction in contract volume. “Despite this, GBRf continued to work with EBP for high quality rail solutions into their operations, providing reliable services and maintaining a strong customer relationship”, says the rail freight operator.

The contract renewal which will now run until 2023, will see GBRf continue to provide services to and from Ferrybridge.

49 million fine for railway cartel in Belgium, Germany and Austria