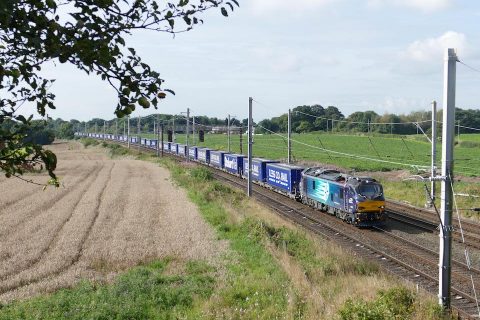 Well known for their glow-in-the-dark nuclear flask trains, Direct Rail Services are also the shining light behind some of Britain’s most vital supply services. In the farm to fork chain, DRS provides the long-haul connection, but a much-anticipated public show of their own produce is a casualty of the crisis.

A leafy suburb of Carlisle in the north west corner of England may not be the obvious epicentre for covid-critical operations, but the head quarters of Direct Rail Services has been going flat out so Britain does not run out, when it comes to the essentials in life.

No stranger to a high-visibilty vest and a stint checking out DRS dispatches, managing director Chris Connelly took a moment to praise colleagues who are pulling their weight to make sure DRS trains pull theirs. “Everyone at DRS is doing an absolutely fantastic job”, he said. “All our colleagues have pulled together to ensure we can carry on working at the same time as helping protect each other”.

Keeping Britain supplied during the coronavirus crisis, while keeping colleagues safe has put an extra strain on the operator. A matter of months ago, but almost in another world, the company was on stage with partners Stobart Rail and Tesco, picking up their latest awards, for the collaboration that dispatches the familiar supermarket trains, with their blue corporate livery and witty “Less CO2” logo.

Keeping essential services on track, as the company puts it, has meant the team has pulled out all the stops throughout the Covid-19 outbreak.

Best known as a subsidiary of the British Nuclear Decommissioning Authority, DRS continues to discretely move nuclear materials around the country. Shoppers might be reassured to learn that their fresh produce does not go in the same consists. So no unplanned pasteurising en-route to re-stocking the shelves. The produce destined for hungry shoppers is rather more delicate than the bulk loads carried in equally important infrastructure trains, also provided by DRS.

Regardless of the load behind the locomotive (both locomotives for the nuclear flask trains) the paramount concern remains the safety of crews and support staff. The Carlisle-based firm has enacted its business continuity plans and put in place extra layers of safety and protection for all its staff. That means new protocols for everyone, from train crew to engineering and maintenance teams, through to train planners and the essential office-based staff that keep the trains running on time.

Still running, as part of the crisis-revised timetable, DRS also continues to provide support to passenger train operators, so that key workers can compete essential journeys. Highly visible in Scotland, and crossing the famous Forth Bridge daily, are two rakes of DRS-hauled coaches. Fife has its key workers conveyed by DRS, as well as having supermarket shelves stocked from their trains.

“We have an important role to play to help keep the country going during these difficult times”, added Connelly “DRS services make sure the country’s nuclear power stations can keep working, food and other goods are available on supermarket shelves, key workers can get to their place of work, and the rail infrastructure can be maintained”.

Keen observers have spotted intermodal trains running fully laden of late. DRS move thousands of shipping containers every week, and in the initial weeks of the crisis the company has been running some of its longest trains to keep up with demand.

There has been one casualty of the crisis. The company’s outreach programme is on hold. Their phenomenally popular open day at Crewe has been cancelled, with much regret all round. However, there is a promise that it will be back in 2021, bigger and better than ever. Rather like DRS itself, in fact.