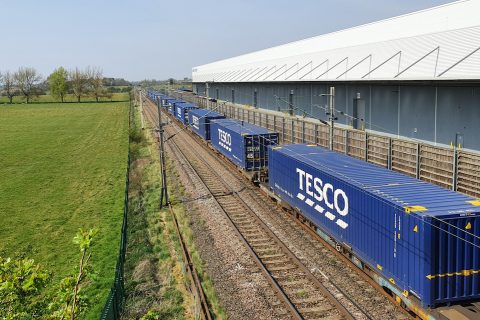 The Easter long-weekend is normally one of the busiest times on the UK network for major maintenance and enhancement projects. Despite the coronavirus crisis, this year is no different, with crews at work around the clock and around the country. Projects include the key route for freight, the West Coast Main Line.

Despite the closure of the busiest rail artery in the UK, food and medical supplies are still vital and need to run. Trains which normally use the West Coast Main Line will still get through, thanks to an elaborate diversion plan.

Keeping those supermarket specials running ensures stocks of vital household goods and foodstuffs will reach the shelves, particularly in the north of England and remote parts of Scotland.

According to Network Rail figures, freight trains will move 34,000 tonnes of supermarket produce across the English-Scottish border this Easter weekend despite their usual rail route being shut for planned upgrades.

Network Rail is replacing Euxton Lane Junction near Preston, a critical and busy location, serving passenger and freight trains running north – south, and to and from Liverpool and Manchester.

Freight operators are cooperating with a significant diversion via the East Coast and Edinburgh to ensure distribution centres are served as normal. This weekend, Scotland-bound freight trains will travel from Daventry International Rail Freight Terminal (DIRFT), in Northamptonshire, making a 100-mile (160km) detour via Derby, Sheffield, Doncaster, York and Edinburgh. If all goes according to plan, destinations including Mossend near Glasgow and Inverness in the Scottish Highlands, will be served as normal.

David Hunter, senior route freight manager for Network Rail, praised everyone who is working over the Easter break, and especially during the current crisis. “During this very difficult time for Britain, the railway’s role is clear – to keep essential workers and vital supplies moving. For Britain to function, it needs the railway. We need our critical frontline railway workers. They are Britain’s hidden heroes”.

The works this weekend extend beyond the West Coast. In fact, sections of the East Coast will be closed near to London, where replacements and upgrades are talking place. The work will see the track renewed, with the old rail and sleepers removed and new ones installed, said Network Rail in a statement. The work will improve track quality in the area meaning smoother journeys and fewer delays.

Tunnel works in the west of England

There is also an extensive programme of works in Wales and the west of England. Affecting most routes in the part of the country, work will continue to maintain the drainage system in the historic Severn Tunnel, which is also being electrified as part of the upgrade of the main line between Wales, the west of England and London.

Work is also being carried out at Paddington, the London terminus of the line. Structural repair work within the low-level parts of the station will stabilise an adjacent access road, which provides access for emergency vehicles to St Mary’s Hospital.

Network Rail says that other originally planned work has been postponed as it is either not possible to do within government guidelines on Coronavirus or is not immediately critical to the running of the railway.