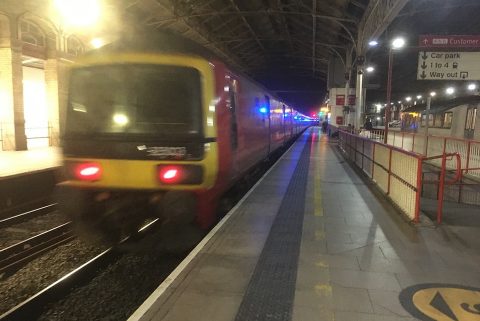 Britain’s commercial backbone railway is carrying everything vital to the continued economic activity of the UK. That includes the Royal Mail, and some 29 million letters from the Prime Minister to every household in the country.

With greatly reduced passenger services now running, freight has become far more visible on the rail of the United Kingdom. Something approaching 200,000 tonnes daily is being moved on the WCML. Network Rail, the national infrastructure agency, puts the figure at in excess of one million tonnes per week.

That manifest includes heavy bulks like steel – vital for food canning and preservation – to fuel supplies for power stations and distribution centres to keep the lights on and the supply network operating. However, the specialist postal trains have been in evidence, especially as much of the airborne fleet is now grounded.

In years gone by, the mail train was a common sight on Britain’s railways. However, many flows have been superseded by road transport. For long distance, aircraft have been used on routes where speed is essential to maintain the UK standard of next day delivery for mail. However, the passenger aircraft used for that service, usually overnight, are now being progressively grounded.

As the coronavirus pandemic goes on, Network Rail has identified as a priority the necessity to keep vital supply routes, notably the West Coast Main Line and its key arteries, open. “Critical to this are frontline specialists, such as signallers, without whom the railway cannot operate”, says a statement. “Our frontline key workers, including signallers, control room staff and track engineers are the hidden heroes in this national team effort”.

Every household in Britain is expecting a letter from Boris Johnson, the Prime Minister, at some point this week. However, with the head of government personally affected by Coronavirus, and with the situation changing almost hourly, it will take the efficiency of the rail network, and the back up of the Royal Mail, to make sure those letters are delivered.

This is the Night Mail

The key rail flow is from the vast sorting office at Wembley in north west London, to the equally busy Shieldmuir postal centre in Glasgow. Postal packets account for some of the 20000 tonnes of goods that pass through the now almost empty passenger platforms at Preston, a key junction on the line.

That figure has ramped up since the Coronavirus crisis broke. Particularly, intermodal tonnage – carrying basic essentials – has increased. The distances between suppliers and supermarkets in the north of Scotland is making it very difficult for road suppliers, and rail has for a long time been a preferred means of supply. The supermarket trains are the stuff of gossip in Scotland.

Network Rail has already noted that rail plays a particularly vital role in supply the north of England and Scotland, where supermarkets rely heavily on rail delivered goods, to keep the shelves stocked. With some of the UK’s most important economic infrastructure based in Scotland, such as the vast Grangemouth oil refinery, there is considerable southbound traffic as well.

Often referred to as the backbone of Great Britain, the West Coast Main Line is proving even more important. It may well be rechristened the spine and nerve centre of the country. The UK may well be paralysed without it.

Rail has always been used in times of crisis as convienient because it`s there and quickly forgotten about when things get back to normal. Remember when the Petrol tanker drivers went on strike in the early 00s? Extra petrol trains were run where possible.(But mostly not because comnections had been removed!Hamble being one example!)Passenger trains were packed because of the long queues at garages and the petrol shortages.Then empty trains again as soon as the crisis was over!

Rail has always been used in times of crisis as convienient because it`s there and quickly forgotten about when things get back to normal. Remember when the Petrol tanker drivers went on strike in the early 00s? Extra petrol trains were run where possible.(But mostly not because comnections had been removed!Hamble being one example!)Passenger trains were packed because of the long queues at garages and the petrol shortages.Then empty trains again as soon as the crisis was over!