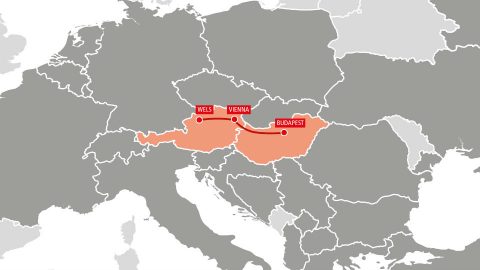 The Austrian Rail Cargo Group and German Kombiverkehr have partnered up to realise a three-weekly rail freight connection between Wels, Vienna and Budapest. The three cities in Germany, Austria and Hungary are main nodes in the Central and Eastern European rail freight network.

A freight division of ÖBB Rail, Rail Cargo Group (RCG) claims to not only connect these three CEE countries, but the entire northern European region with south-eastern Europe and the Asian part of Turkey. Due to the cooperation with Frankfurt Kombiverkehr KG, the service has direct access to both networks from a single source, the company writes.

“Customers can switch directly from the respective terminal to the Kombiverkehr and ÖBB RCG networks. The results are attractive, continuous transit times and an optimal timing of the schedules in Wels CCT-Vienna South CCT-Budapest BILK to the respective main runs. Customers benefit from an optimal connection to the international intermodal networks of both logistics partners”, RCG commented.

“With the commissioning of the new TransFER connection between three of the most important intermodal hubs in Europe and the simultaneous linking of the extensive network of Kombiverkehr and ÖBB RCG, customers from the transport and logistics sector will be offered another attractive opportunity to shift traffic from road to environmentally friendly rail. ÖBB RCG thus not only creates network effects between Italy, Romania, Bulgaria and Turkey, but above all attractive logistics solutions between the entire Northern, Central and South-Eastern European region.”