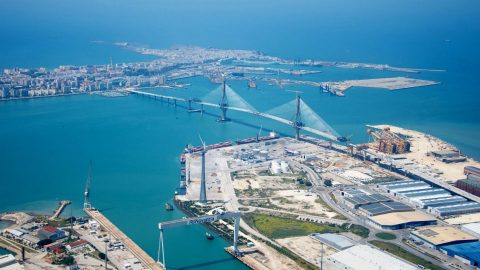 Multimodal service between port of Cadiz and Madrid

A new rail freight service between the Port of Cadiz and Madrid started on 11 May. Once a week a train with 33 wagons travels between the Spanish hubs. In Cadiz, the train connects to the shipping lines running back and forth the Canary Islands. The ambition is to increase the service to three times per week.

Initially, trains terminate at Guadalcacin rail freight station in Jerez de la Frontera, 37 kilometres far from the port. Here the goods are transferred onto lorries, which carry out the last mile to Cadiz. The rail freight station is managed by the authority of Cadiz port, having contracted Concasa to handle sea containers in the port. Acciona Transmediterranea handles the sea shipment, while the rail service is operated by Tratansa, which has a joint venture with Renfe Mercancias.

Guadalcacin station is a temporary alternative to the new rail freight station in Puerto Real, ten kilometres far from Cadiz. This is the gate to the port, which is located in an island connected to the Iberian Peninsula with a sand branch. The rail freight station will have a total extension of 12,500 square metres and two tracks. It will offer loading facilities and warehousing of conventional and dangerous materials.

The new rail freight service wants to propel container traffic in Cadiz, the eldest Spanish port. The port has a key role in supplying the Canary Islands, 950 kilometres far from the European Atlantic coast and 60 kilometres from the African coast. Cadiz was founded by Phoenicians in the XI century before Christ, having been an essential hub in the Spanish colonial trade with America in the XVIII century.