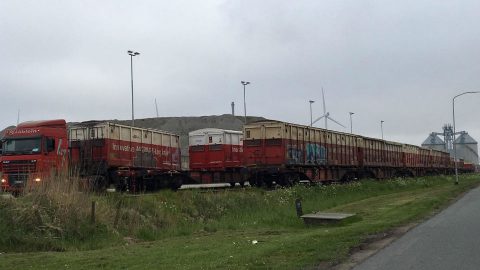 Reusable waste on train from the Netherlands to Austria

Dutch shipper N+P Group carried out several shipments of waste and residue material by train between the Netherlands and Austria. Using open-top containers to lift reusable material from its production site in Farmsum to the steel factory in Linz, it has entered a new approach to transporting waste.

The product on the train is the patented Subcoal®. This is produced at the N + P Group site near Delfzijl in Groningen. In this factory, “non-recyclable waste” is processed in an innovative way into a fuel pellet, called Subcoal®. The pellets are used in the steel industry as a coal substitute and in power plants. This secondary fuel reduces the use of fossil fuels.

“Since waste and residues are low-value products, margins are low and logistics must be very efficient. N + P Group has therefore specialised in finding creative solutions for transport within these frameworks”, the group commented.

The wagons were put on the train and loaded without the intervention of transfer cranes and/or terminals. According to N + P Group, the truck with chassis took the empty open top containers from the wagons, loaded them and put them back on the train.

“This is very unique in the Netherlands. Apart from a number of previous tests, this concept has now been used for the first time to load a larger volume.” The company called the succedssful operation a boost for rail freight transport from the Netherlands.

N + P Group processes and trades residual materials and waste with its head office in Nieuw Bergen in Limburg. They now have branches in the Netherlands, England, France and Germany with a total of more than 85 employees.

N + P Group has been a reliable producer and supplier of secondary fuels and raw materials for 25 years. Every year, N + P Group supplies more than two million tonnes to customers in various European countries and even beyond. The patented product Subcoal® is produced at a production site of N + P Group in Groningen. In this factory, “non-recyclable waste” is processed in an innovative way into a fuel pellet, called Subcoal®.