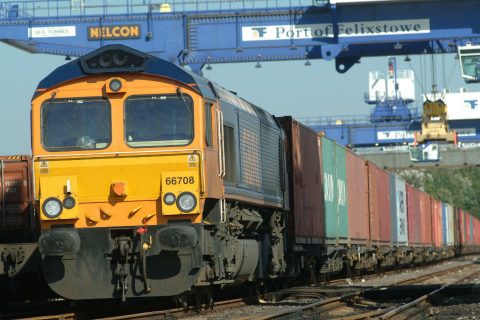 A new intermodal rail freight service connecting the Port of Felixstowe with the Birch Coppice terminal in the Midlands has been launched by GB Railfreight.

The first locomotive on the service left Birch Coppice at 14:14 on 23 January 2019 and arrived at Felixstowe at 20:14, having passed through Hams Hall, Leicester, Peterborough and Ipswich along the way. Made up of 33 platforms, the service transports a mixture of intermodal containers, and will initially run five days a week.

Commenting on the new service, Clemence Cheng, Chief Executive Officer at the Port of Felixstowe and Executive Director of Hutchison Ports, said: “We are delighted to welcome this latest service offering from GB Railfreight. The Port of Felixstowe already offers a wide array of rail services through our three intermodal terminals and this latest service supports the range of sustainable transport options available to port users.”

John Smith, Managing Director of GB Railfreight added: “We are thrilled to be putting on this new service, which will be running on a daily basis. It is demonstrative of the wider sea change we are seeing in the rail freight industry, as the UK moves from its industrial roots to become a service and consumer- led economy. This is reflected in the fact that intermodal traffic now accounts for approximately 36 per cent of the rail freight industry wide.

The new service means that Birch Coppice can accommodate business that was going to Hams Hall. “This allows our client Wincanton additional space for its logistics operation that is centred around the facility”, said Smith.
Regular rail services are also run from Felixstowe to Glasgow, Manchester, Liverpool, Leeds, Teesport, Birmingham, Doncaster, Selby, Hams Hall, Wakefield, Ditton (Widnes), Rotherham and Cardiff.