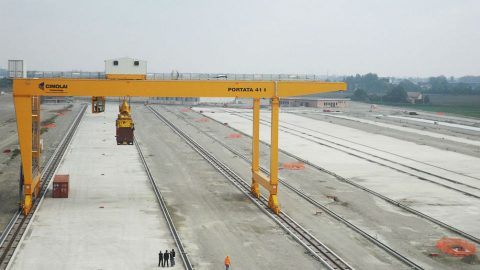 A new rail freight terminal has been opened in the North Italian city of Marzaglia, close to Modena. Italian infrastructure manager Rete Ferroviaria Italiana (RFI) opened the facility in the first week of January. The first train arrived on 7 January, orginating from Limburg (Southern Netherlands, close to Germany) and carrying clay.

The station has three railway tracks and is focused on traditional rail freight services. RFI will add another four tracks in December 2019, connecting the station with the airport of Marzaglia-Modena. In this way, it is set to develop an intermodal hub. The investment will total 90 million Euros.

The new infrastructure is crossed by the rail line connecting Bologna, 45 kilometres far from Modena, and Piacenza, connected with Milan via rail. Once the rail freight station is completely ready, the cargo infrastructure in Marzaglia airport will become operative. Many transport operators have expressed interest in the service.

The new terminal was initially set to have five rail tracks, but the interest of several companies has increased this to seven lines in order to boost the handled good tonnage in the new airport.

Modena is the most important ceramic manufacturing area in Italy. Thousands of railway services every year deliver clay to the area. The new terminal is essential to eliminate the current bottleneck on the road network.

In addition, the 5-Stars Party (M5S), co-governing Italy with the Northern League (LN), considers this civil work as a priority, after experiencing a 14-year delay.