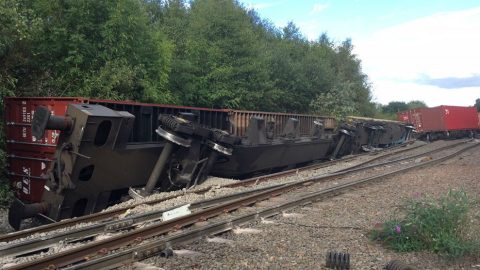 Railway services between Birmingham New Street and Nuneaton in the UK have resumed. The line was reopened on Sunday evening, after a 5-day closure due to the derailment of a freight train.

Seven wagons of a 32-wagon freight train travelling south from Coleshill freight depot derailed on Wednesday 12 August. Four of the wagons were on their side, obstructing the railway. The incident also caused significant damage to the track, said Network Rail in a statement.

Due to the accident, all railway services between Birmingham New Street and Nuneaton were cancelled. Other services through the area were disrupted or affected by knock-on delays. Freight as well as passenger trains were diverted for a period of five days.

Engineers have worked  round-the-clock to re-rail the wagons, repair the damage and reopen the railway, which finally happened a day sooner than expected. “The cause of the incident is under investigation and Network Rail is working with the Rail Accident Investigation Branch to determine the cause”, the British infrastructure manager said.