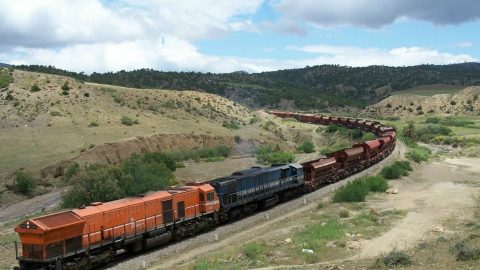 Algeria to handle 17 million tonnes of freight in 2021

The Algerian government plans to transport 17 million tonnes of freight by rail in 2021. By this time, the construction of a new railway station in Beni Saf, a city close to the frontier with Morocco, is completed. This was noted by transport minister Abdelghani Zaalane.

Zaalane’s optimism is partly based on the fact that Algeria has more than doubled its railway network, from 1,800 kilometres in 2000 to 4,200 kilometres in 2018. Another 2,300 kilometre of railway track will be added in 2021, linking the inland areas of Moulay Slissene in the east and Tebessa in the west. In addition, the ministry is preparing civil works to increase freight capacity and rail connectivity of the Atlantic ports (mainly Bougie, Alger and Oran). This should reduce the logistics cost of exporting cement, agri-food and iron factories.

Algeria has been developing its railway network to stimulate national economic integration since 2013, in response to the social revolts witnessed during the Arab Spring (2012) in the main cities. With the civil works, the government aims to create job opportunities for the young unemployed population, integrate inland cities in the east and west and to increase the international trade of factories situated far from the Atlantic coast.

The opening of the El Qantas rail tunnel, the largest in North Africa, in December 2017 was one of its most symbolic projects. This tunnel improved rail connectivity between Oran and Alger, which together form the main national economic axis.