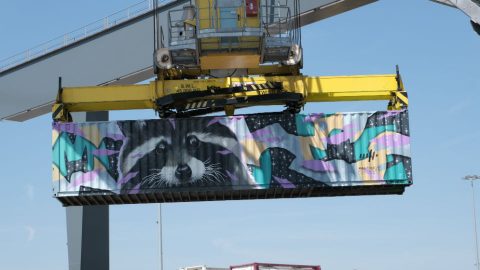 Noah’s Train, the ‘largest mobile artwork’ that left Katowice in December last year, has just picked up another two containers in Luxembourg. The train stopped in the capital city on 10 July, where the newly painted units were added to awareness train.

The train now consists of fourteen artfully crafted containers, that will roll on through Europe until October. Then, one containers on the train will be shipped to Chile, where the climate top COP25 will take place. The train has then made a journey of a year; when it left Katowice, the Polish city was the scene of this same climate top in 2018.

The addition to Noah’s Train was presented in the presence of political figures and representatives of the Rail Freight Forward alliance. François Bausch, Minister of Mobility and Public Works, underlined the Luxembourg government’s political will to put logistics at the heart of Luxembourg’s economic diversification policy, to support investment in national logistics centers and to invest in efficient and innovative infrastructures.

Rail Freight Forward works to mobilise railway undertakings so that they offer attractive and competitive services, infrastructure managers so that they ensure easy travel through Europe by train and national institutions so that they guarantee a level playing field between the different modes of transport. This was explained by Marc Wengler, CEO of CFL, member of the alliance.

Noah’s Train is an initiative launched by several European railway companies to promote freight transport by rail. Gathered in the Rail Freight Forward coalition, they defend a common goal: reducing the environmental impact of freight transport in Europe.

Founded after the COP24 in Katowice, the Rail Freight Forward coalition currently counts 18 members. They wish to raise awareness of a transition towards more environmentally friendly modes of freight transport. In more concrete terms, they want to double the share of rail freight in Europe from 18 to 30 per cent in 2030.

The journey of Noah’s Train started in Katowice, Poland and then headed to Vienna, Berlin, Paris, Brussels and Rome. A recent stop was made in Munich on 4 June to be present at trade fair transport logistic.