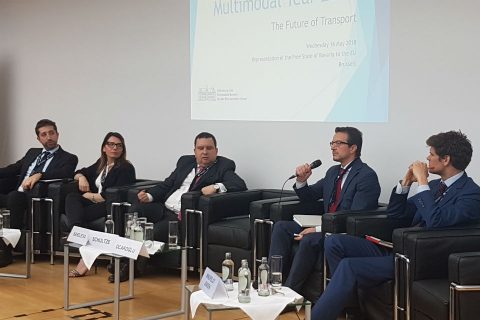 The European Parliament’s Transport and Tourism Committee Rapporteur, Daniela Aiuto, has delivered her report to the European Commission with at least 27 amendments to the Combined Transport Directive. The deadline for suggesting amendments to this legislative piece was Wednesday 16 May. Policymakers, industry leaders and stakeholders discussed the directive during the Multimodal Year 2018 – The Future Of Transport event, held in Brussel on the same day.

The Combined Transport Directive (92/106/EEC) is an EU instrument that aims to reduce the negative side-effects of goods transport on the environment and on society by supporting the shift from long distance road transport to long distance rail, inland waterways and maritime transport through economic incentives. However, stemming from 1992 without any prior amendment, the legislative piece is outdated and unlikely to realise the objected modal shift. The European Commission has proposed amendments to the Directive and carried out several consultation exercises over the last four years. The Parliament delivered its feedback yesterday.

“Wit our proposal, we want to modernise the Directive and see how we can extend the scope of support for combined transport. If you look at the overall share of intermodal transport covered by the directive today, about forty per cent can benefit from the measures, either regulatory or economically. We want to increase this share by seventy per cent”, said Gzim Ocakoglu, Deputy Head of Unit European Commission.

With this objective in mind, the commission has proposed to extend the scope of the definition of road transport, he explained. “While the current legislation focuses merely on international transport, we have now included national transport as well.” Another amendment is the increased length of the road leg to 150 kilometres as the crow flies. In case of rail-road combined transport, the road leg is limited to transport to the nearest suitable rail loading and unloading station. The maximum distance of the road leg will be increased to 150 kilometres with a twenty per cent flexibility.

“The Parliament supports the extension of the road leg to 150 kilometres”, revealed rapporteur Aiuto. The extension serves specific shippers needs, such as in countries like Sweden, where long distances are unavoidable. There is however much to be debated about the flexibility permitted. Flexibility could either be based on certain criteria set by the Directive, or be left to the individual Member States, she explained.

In general, authorisation of the respective states is considered to be step back, towards more regulation in a sector that benefits from interoperability. The International Union for Road-Rail Combined Transport proposed the possibility to “exceed the maximum allowed road leg distance on either end of a combined transport operation based on the prerogative and justification of the operator of the transport in order to continue with existing combined transport operations that require a longer road distance for deficiencies of the rail infrastructure or the existence of freight terminals”, in another amendment.

Apart from widening the scope of support, more investment is needed in infrastructure, most importantly in building more multimodal terminals to support combined transport operations, said Ocakoglu. “In Central Europe, where there is a lot of combined transport, there are enough terminals but there is a shortage of capacity. We propose more investment in this field.”

But also this measure leaves room for debate, as a one-size-fits-all solution is not desirable, pointed out Anders Windfeldt Jensen, Transport Attaché from Denmark. “There are different levels of development and transport systems in the individual Member States.” Aiuto added: “Terminal-building should be incentivised, but not enforced.” Ocakoglu ensured that the focus is on the right terminals, with the neccesary capacity to provide services for different transport modes, rather than a lot of terminals in a given area.