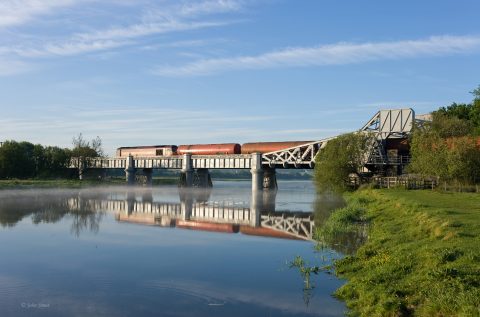 The steady decline of coal as a commodity was a major factor in UK rail infrastructure manager Network Rail’s reduced income from freight line services last year, according to its annual report.

It received around £52 million through operators’ use of the track infrastructure during the 2016/17 financial year, less than the projected £60 million, and a million pounds less than the previous year. “Financial performance (freight income) was a major challenge due to the continued decline of coal moved on the network,” says the report.

The company has now set up a business development team to identify new growth and income opportunities, adds the report, which also says Network Rail is continuing to work with Freight Operating Companies (FOCs) and ports and terminals across the network to increase the number of trains that depart on time. The vast majority (81.3 per cent) of freight services departed at the scheduled time, up on the target figure of 78 per cent, and also slightly up on the previous year.

There were 40 incidents of ‘signals passed at danger’ (SPAD), when a train passes a stop signal without authority to do so, last year, the same as the previous year but a fall of 20 per cent on the target figure. Network Rail says this fall is ‘partly testament’ to regular safety meetings with FOCs and the developing work of the National Freight Safety Group, which along with Network Rail also comprises UK rail freight operators, national regulator the Office of Rail and Road (ORR), and the Rail Safety Standards Board.

Network Rail also says it has outperformed its freight derailment target (13 incidents, the same as 2015/16 but down on the target of 15) and plans to do ‘further derailment risk management work’ on freight-only infrastructure. Focusing on its ‘highlights’ of the year, the report says it delivered a number of improvements to the network to help meet customers’ needs, including enabling longer trains to run between Southampton Port and the West Midlands, and work on routes in and out of Yorkshire’s freight terminals to enable the movement of larger containers.

“Our strong collaboration with the rail freight industry resulted in freeing up 4,072 allocated freight paths to provide further capacity on the rail network,” says Paul McMahon, Managing Director of Network Rail’s Freight and National Passengers Route (FNPO). As previously reported, a Network Rail review earlier this year revealed that more than half the allotted freight paths were not being used, and that most of the unused routes would be reallocated for passenger use.

“The priorities highlighted in the study are around capacity and capability enhancements to support access to the major ports, as well as gauge clearance to allow a wider range of containers on the Channel Tunnel route to London,” says McMahon. “The route had a strong focus on attracting private investment to increase freight traffic levels and grow income. We are working with developers of about a dozen new rail freight terminals which are being developed on our vacant land that are wholly funded by freight end users for loading and unloading their goods.”

Plans for the coming year include developing and delivering Strategic Freight Network schemes, an example of which is enabling an extra ten trains a day to and from the Port of Felixstowe on the east coast; producing a ‘robust plan’ with proposals for sustainable track access charges, and continuing a positive, collaborative approach with Network Rail’s partners.

The ORR says Network Rail is under increased financial pressure, with its borrowing facility over the next two years, leaving it ‘little room’ to protect against any unforeseen cost pressures that emerge. To remain within its budget, it adds, Network Rail has deferred railway renewal work from the current five year spending period into the next (2019-2024). This will have implications for the future performance and sustainability of the railway and the service passengers and freight customers receive ‘unless it is addressed in the next spending period’.

Joanna Whittington, ORR Chief Executive, said: “Network Rail’s performance over 2016-17 has been mixed. The railway continued to be safe and the reliability of some assets has increased. However, these benefits have been overshadowed by continued inefficiency and poor train performance. We’re changing the way we regulate Network Rail to sharpen its focus on efficiency and performance. Network Rail must do its part and press on with its transformation programme, demonstrating that this will start to address inefficiency and meet performance expectations of passengers and freight customers now and into the spending period starting in 2019.”

The way it is going with DBC ,Drivers jumping off the ship before it sinks,some how I don`t think that punctuality target will be 81.3% next year!