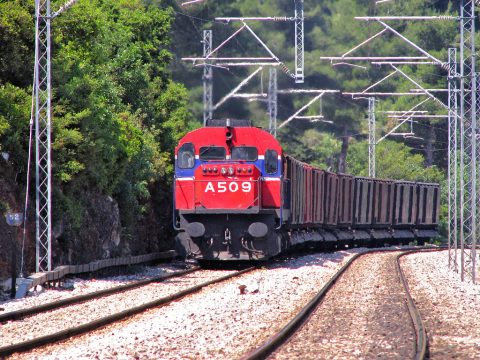 Measures taken in Greece to support the restructuring of rail infrastructure manager OSE and the country’s sole freight & passenger operator Trainose are in line with EU state aid rules, the European Commission (EC) has said.

Both companies have been facing financial difficulty for a number of years, and in 2008 Trainose became a ‘spin-off’ from OSE. The ongoing economic recovery programme in Greece advocates the restructuring of companies on the basis of their importance to the Greek economy.

In 2011 Greece put forward several measures to the EC designed to provide support to both OSE and Trainose. The aim was to ensure the companies’ viability and ensure that rail services continued to operate, thus heading off the possibility of another serious blow to the Greek economy. After investigations, the EC found that that measures for assisting Trainose, namely a debt cancellation, an equity increase and annual grants, worth a total of 1,079,000 Euros, were in line with European Union (EU) state aid rules.

In addition, measures to support the restructuring of OSE through a debt cancellation of 14.3 billion Euros, the transfer of more than 750 management employees and annual grants implemented after October 22 2014 did not constitute state aid. The commission says this is because the measures related to OSE’s activities as the national rail infrastructure manager, and as such could not ‘distort competition’ or affect trade between member states. Moreover, the transfer of 217 maintenance employees and annual grants of up to 340 million Euros implemented before October 22 2014 were also in line with EU state aid rules.

European Commissioner Margrethe Vestager, who is in charge of competition policy, said: “The measures will help the two public rail companies become more efficient and provide better service to Greek (passengers) business customers. This fits into the wider context of Greece’s efforts to restore its economy’s competitiveness and achieve significant growth. The aid will also facilitate the future privatisation of the companies and the opening of the Greek railway sector to competition.”

The EC said it had taken into particular account the difficulties faced by the Greek railway sector within the context of the country’s ongoing economic problems, and the importance of a well-functioning railway service for the population. The measures, it added, had the ‘legitimate objective of avoiding a serious disturbance’ of the Greek economy, without unduly distorting competition in the single market.

Earlier this year Trainose was sold to Italian state operator FS Italiane in a deal made doubly significant through Greece being part of the EU’s Orient-East Med Core Network TEN-T Corridor. The network facilitates a trans-European route which starts in the sea ports of northern Germany, and continues via Greece and its connecting shipping services onto Cyprus and beyond. FS Italiane Group was declared last year as the ‘preferred investor’ in the deal which is worth 45 million Euros

Trainose’s existing rail connection with the Port of Thessaloniki enables freight transportation into the heart of the hinterland, as well as the transit through Greece. Following the completion of the connection between the Port of New Ikonio and the wider network, Trainose also offers multimodal transportation into central Europe (Hungary, Slovakia and Czech Republic) and is actively pursuing new freight customers through that gate.

The company’s next target is to provide regular transportation of containers to and from Thessaloniki, Skopje, Belgrade, Sofia and Istanbul, aiming at the creation of a multimodal transportation hub in Thessaloniki for the Balkans.