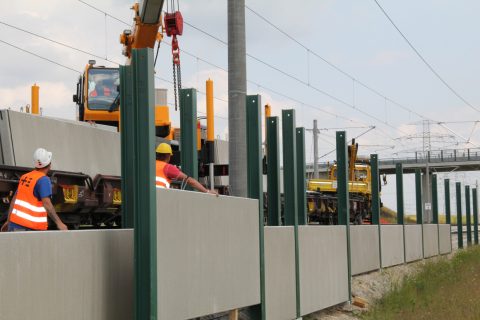 The ‘Quiet Rail Strategy’ being adopted by Germany means noisy freight wagons will be banned from the national network within four years. The Ministry of Transport says wagons will need to be fitted with so-called ‘whisper’ brakes in order to meet new regulations. It follows the passing of legislation which means that after December 13, 2020, freight operators could be fined up to 50,000 Euros if they fail to meet the stringent requirements.

Federal Transport Minister Alexander Dobrindt said: “We want to create more mobility while halving rail noise by 2020. To this end, we are promoting the conversion of freight wagons to whisper technology, investing in noise protection on routes and tightening up the regulations.

“With the driving ban for noisy freight cars, we have an additional incentive to convert end-of-life vehicles and protect the residents of freight transport routes effectively against rail noise. We are thus gaining more acceptance for rail freight transport.”

After 13/12/20, freight wagons may not cause any more noise than one which has received an operating licence according to the European noise protection directive (TSI) noise applicable to new vehicles. But the retrofitting of ‘whisper’ brake technology to old wagons will enable operators to adhere to the new regulations.

The Quiet Rail strategy comprises three main elements: noise protection at the source, including the upgrading of freight wagons and innovations for quieter trains; noise protection on the track, including noise abatement measures such as barriers and soundproof windows; and regulation, such as a ban on noisy wagons.

The German Pro-Rail Alliance (Allianz pro Scheine) strongly supports moves to bring an end to noisy freight wagons, previously describing the planned legislation – now passed – as ‘long overdue’, while DB Cargo, Germany’s biggest rail freight operator, recently announced it would be revamping its entire fleet within the next three years. It plans to spend more than 200 million Euros to halve noise pollution on its cargo trains by the year 2020, potentially benefiting tens of thousands of people living near train lines.

Violeta Bulc, the European Union’s Transport Commissioner, has said that a co-ordinated European solution to tackle rail freight noise is the only way to prevent unilateral policies threatening the internal railways and interoperability. Speaking at the Symposium on Competition & Regulation in Rail in January, she that by failing to work together, member states would force a situation that nobody wanted.

“This is surely the most sensitive environment problem the sector faces and, I recognise, a serious nuisance for citizens living close to railway lines – I also know what a big issue this has become here in Germany,” she said. Work had already begun – specifically the revision of the TSI rolling stock noise reduction policy – to address it, and the European Commission aimed to finalise the revision process in the first half of 2018.

The International Union of Railways (UIC), in its 2016 report Railway Noise in Europe, said reducing noise from rail freight had been identified by the European railway sector as a key objective, and that it was an issue of ‘high political sensitivity’. This was particularly the case in densely populated regions in the centre of Europe close to the busy Rail Freight Corridor One. This is the Rhine-Alpine Corridor which stretches from the north sea ports in Belgium and The Netherlands, and down through France, Switzerland and Italy to the Mediterranean port of Genoa.

Railway noise control, said the UIC, was now at a ‘turning point’, with the main noise control strategies such as the retrofitting of quieter brakes – as outlined in the German government’s latest announcement – now in its crucial implementation phase. But, it pointed out, there remain other issues to tackle, such as residents disputing the impact of noise barriers on their view and the landscape, and impact of vibrations caused by heavy wagons.

“Noise exposure and the cost of noise control must be effectively managed if rail is supposed to increase its market share, and in doing so reduce the total environmental impact of the whole transport sector. Momentum must be maintained and current noise control programs implemented so that the full benefits can be realised. This will only be the case when all large fleets of freight wagons used for international traffic are included in the retrofitting operation,” added the report.