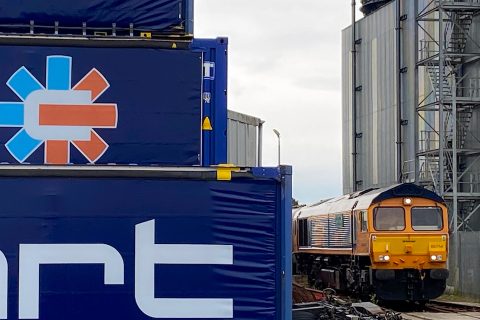 Its official launch was delayed, but a new intermodal service linking Yorkshire and Scotland is successfully underway. The iPort terminal in Doncaster and Mossend International Railfreight Park in Scotland have been connected by a brand new intermodal service, carrying a variety of goods for a variety of customers. The modern equivalent of the scheduled mixed traffic goods service has already proved a popular option to connect markets on the east side of England with the Central Belt of Scotland, a route not well served by road options.

The growing terminal at Mossend is emulating the established success of iPort in Doncaster, and the new connection between them both says much about the confidence for the future expressed by the rail freight industry. The official launch was delayed by the death of The Queen, but with good loadings in each direction already reported by the operators, it seems likely to be a right royal success. The train currently runs five days a week in both directions and is hauled by GB Railfreight.

Peter D Stirling Ltd, the locally based logistics company, has completed a series of shakedown runs between their Scottish base and the north of England. The company, which generally keeps a low public profile, has formally announced the commencement of another new intermodal service at their fast-developing Mossend International Railfreight Park (MIRP).

The daily service connects Scotland to Yorkshire’s iPort Doncaster with GB Railfreight as the traction provider. Extensive marketing effort in the run-up to the launch has seen the support of a number of established brands and household names come on board. “The service, running newly branded Culina Group and Eddie Stobart containers, continues to facilitate rail freight that supports the shift to low carbon and net zero targets in modern logistics”, said a statement on behalf of PD Stirling.

A champion of zero-carbon logistics

The intermodal launch provided support to the bid from the company to be part of the Clyde Green Freeport, the Scottish government’s answer to the Freeport initiative launched by the UK government last year. The development of Mossend International Railfreight Park (MIRP) has already been the venue for other government initiatives, including the Scottish Government’s Green Investment Portfolio.

High street names on board

The new intermodal service, started last month, is running five days per week, with thirty boxes each way each day capacity. Culina Group, which took on the rail freight operations of Stobart, is the freight organiser. A source at MIRP confirmed that two “high street” names are on board, with a large Scottish whisky exporter showing interest as well.

Civil engineering progress at MIRP continues. Two new sidings have been laid to help with the arrival by rail of construction material for the terminal. Even though there is now a direct daily link, there has been no response to suggestions that the Scottish terminal is renamed “Och Aye Port”.

UK businesses can soon share their stories in a full-colour digital magazine tailored to the UK rail industry. The RailFreight UK Christmas Special will be published on 15 December. Details, including how to take part, can be found here.