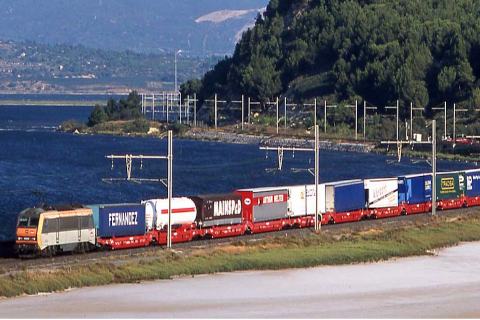 ‘After the Great Belt Bridge accident, everyone asked about our safety device’

On the railway line between Perpignan and Luxembourg, trains have to withstand wind currents up till 140 kmph. For the transport of semi-trailers, only the Lohr wagosn are permitted to operate on the stretch where these winds occur. Could this be an example for the Great Belt Bridge in Denmark?

Semi-trailers are still not permitted to operate on the bridge that connects the Danish islands of Funen and Seeland. This is because, after a fatal accident took place in 2019, another potential safety hazard was observed on the bridge involving a semi-trailer, according to the Dansih authorities. The investigation that should reveal the exact nature of this threat is yet to be concluded, but perhaps the French have already paved the way.

Marie-Jose Navarre, Vice-Director of Lohr Group talked about this topic during Railfreight Live last Friday. You can watch the interview below. The article continues below the video.

The railway section between Narbonne and Perpignan at times faces winds exceeding 90 km/h (25 m/s). This is not on occasion, such winds occur on around 50 days a year, says Marie-Jose Navarre, Vice-Director of Lohr Technologies. Winds could even reach up till 140 kmph. On such occasions, the French infrastructure manager SNCF orders the prompt interruption of all combined traffic on this line.

This is why the manufacturers of the Lohr wagons decided in 2006 that a customised pocketwagon should be produced. “Trains run on this line on a daily basis, it was too competitive to give up on the market altogether”, she explained. And so it developed a mechanism that ensures that the semi-trailers hold onto the wagon under the effect of a side wind of up to 140 km/h.

The locking device is called the Hitch Pivot Locking System (SVPA), meant for semi-trailers loaded on Modalohr NA wagons. The safety advantage is in the fact that when facing strong winds, it is able to hold on to the wagon, with what is called an increased retaining force. In this Lohr wagon, the retaining force is 10 t (safety factor greater than 5).

The story gets a little technical, but the company explains: “Lohr carried out a kinematic study of the semi-trailer loaded on the wagon (resting on the tires and on the legs and locked at the level of the kingpin) to define the forces at the level of the kingpin. It can be seen that the wind associated with the transverse acceleration generates a rotation of the semi-trailer around an axis passing through the tires and the legs which relieve the load on the wind side and overload the opposite side. 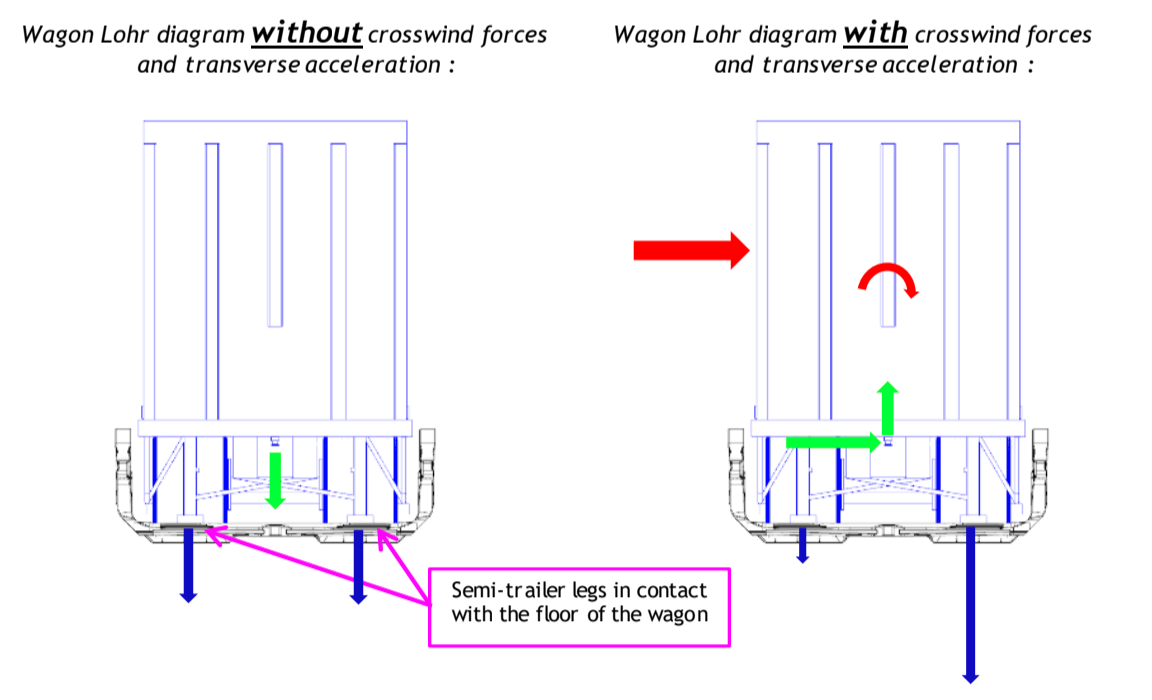 “This study made it possible to define the vertical retaining force of 1.8 t at the level of the kingpin to ensure the holding of the semi-trailer in the wagon. Note that this effort is compatible with Type 2 “semi-trailer kingpins. Lohr decided to design and size all the components of the SVPA for LOHR wagons for a holding force of 10 t (safety factor greater than 5).”

The wagons of Lohr have been running for more than ten years in this very windy area between Narbonne and Perpignan without safety warnings. “We frequently face these strong winds, but the trains run every day without problems”, said Navarre.

Back to the Great Belt Bridge. Is this a comparable situation? Weather conditions did play a role in the accident two years ago. That is why is was required that all freight transport on the bridge takes place under stricter conditions concerning freight trains’ speed with heavy wind conditions. Certain protocols were installed to ensure the safe locking of the pin. But even though all steps were followed, a trailer shifted in its wagon in January this year during strong winds, leading to the current ban.

“It is an accident like the one two years ago that we want to avoid with this system”, she acknowledges. But whether this bridge poses similar risks to the operation of pocket wagons as the Perpignan-Narbonne line, she cannot say. “I am not a safety expert”, she admits. But after the accident happened, everybody asked us about our device.”

“What I do know is that with climate change we will have more and more periods of strong crosswinds, and the only possibility then is to stop all combined transport. This addresses a question to the entire industry, from manufacturer to operator or safety expert: how can we solve this problem in the future?”

The real competition is not with other manufacturers within the rail industry, but with the road, she concludes. “The semi-trailer is in essence a unit of the road. If we want to compete with the road, we must have the best knowledge of what a semi-trailer is. We must study it, and make it compatible with rail.”