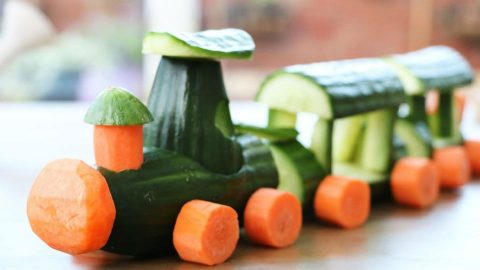 New terminal takes cucumbers from truck to train in 15 minutes

A new dedicated fresh line between the Netherlands and Germany is in the making. In three years it should run between Bleiswijk and Berlin. Why take the train? Because this service offers a terminal turnaround of an hour at most. This is what the horticulture industry demands, explains Mark Remie, initiator of the railway line. And if it is up to him, the concept is applied all over the world.

As the managing director of FFWD Rail, Remie presented the Holland Rail Terminal at the Multimodal Event that took place on 27 June in Rotterdam. The Netherlands is a major exporter of fresh products. Of all the horticulture products grown, 75 per cent is exported, all by truck. “Every day thousands of trucks hit the road to Germany. As a rail person, I see huge opportunities here”, he said.

The concept involves a new terminal, a dedicated fleet and special bogies for this fleet. “Thanks to a special roll-on-roll-off technology, the trailers are moved from truck to train in 15 minutes. The wagons can make a 30 degree turn”, explained Remie. The bogies applied enable the train to increase its speed on the German network. “It operates at the same speed as an intercity train.”

Increasing speed on the logistics chain is an uncompromising condition, Remie explained. “A cucumber starts degrading from the first hour; it needs to get to the supermarket as fast as possible to ensure its value. With many train delays railway is currently unreliable. A delayed train would have a major impact on fresh products, therefore we need to do things differently.”

The Holland Rail Termina will be situated in Bleiswijk, which is not a coincidence, the rail specialist explains. This is adjacent to the western district of Lansingerland, a major export region in the Netherlands linked to the road network by the A12 highway.

The terminal is simple in itself; it includes a few tracks with pavement on both sides and a shunting yard with some tracks. Transshipment is carried out horizontally, rather than with cranes or reach stackers. The technology that makes the difference is in the fleet. The new wagons require an investment of 100 million Euros, Remie explained. The project currently has 40 investors and is supported by the province and municipality.

There is a lot of money involved, but the concept is to change the rail freight sector, the developer believes. Road transport is increasingly taking its toll; the German Maut will increase by 60 per cent this year, and last year traffic congestion increased by 20 per cent. Moreover, 20 per cent of the trucks are at standstill due to labour shortages, Remie cites. “These are business opportunities for logistics providers.”

Other than the financial incentive, FFWD Rail emphasises its CO2 neutrality, as there is no diesel involved in the terminal of Bleiswijk. The shift from road to rail is another element it likes to point out. The train is to take 140,000 trucks off the road, saving 189 million Euros in terms of air pollution and CO2 emissions, the company figures state.

“This service will first connect Bleiswijk and Berlin, but the concept can be applied worldwide. We are planning a second connection to Lubeck in the north, and a third to Nurnberg in Germany. In the Netherlands we want to establish several departure points, such as in Amsterdam, Venlo, Veendam and Food Valley.”

On the long term, the company foresees an entire network of terminals operating on this basis, ranging from Valencia, Milan and Budapest in Europe to Chengdu and Shanghai in China. “This requires a lot of money”, Remie admits. “But we do not necessarily have to be behind all terminals. This is a concept that can be applied anywhere.”