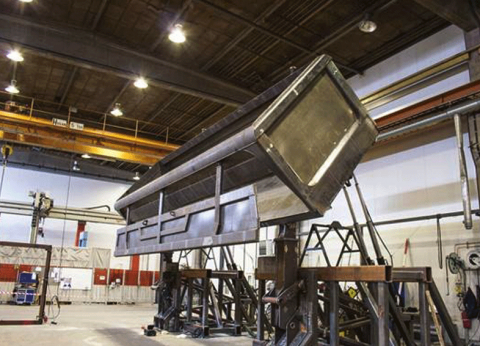 Swedish-based Kiruna Wagon has successfully tested a new side dump wagon and unloading station as part of a European Union (EU) project for developing ‘smart’ rail freight wagons for the mined agricultural sector.

Led by Spanish agricultural and mining specialists Iberpotash and ICL Iberia, the three-year EU-funded Hermes Project is designed to address aspects of freight wagon performance, including higher capacity and more efficient loading and unloading practices. The project is focusing specifically on the development of smart and flexible freight wagons for transporting granular multimaterials.

It comprises nine partners from France, Denmark, Spain and Sweden, one of which is Kiruna Wagon. From its Arctic Circle base in Kiruna, in the mining capital of Sweden, the company specialises in the custom design and manufacture of ore wagons for the Nordic and international market.

During initial trials, Kiruna tested the performance of the load carrier and unloading station without the wagon’s undercarriage and bogie. Further trials of the complete wagon, loaded with iberpotash, the salt commodity produced by ICL Iberia, will be carried out shortly.

Describing the initial tests ‘very satisfying’, Martin Malmelöv, Supervising Engineer at Kiruna Wagon, added: “We are very happy with the outcome. The mechanical principles operated entirely as expected and we will now be looking at details, such as adjusting the hydraulic flow to calibrate the tipping speed.”

“The HERMES wagon is a further development of our side dumper, which has been proven in Sweden’s sub-arctic climate since 2009. A natural step in the development work was to make this wagon lighter and one of the ways in which we have achieved this is by moving the hinge mechanism from the wagon to the unloading station. The result is an updated side dumper that combines our proven side-tipping technology with a much lighter construction with only a central drawbar.”

The EU says the main objective of Hermes is to holistically address the aspects that may improve freight wagon performance at competitive prices, such as enhanced logistics operations, higher wagon load capacity, optimised loading/discharging processes and increased flexibility in order to foster intermodality and allow a diversification of carried goods. The project has received funding from the EU’s Horizon 2020 Programme for research, technological development and demonstration.

Kiruna Wagon was also recently named as one of four nominees for the Swedish Steel Prize 2017, for its innovative Helix Dumper system, a logistics solution for unloading heavy fine-grained bulk goods at a high discharge rate. The prize attracts competitors from all over the world, and this year a record number of applications have been received.

Fredrik Kangas, Managing Director of Kiruna Wagon, said :“It’s an honour for us to be nominated for the Swedish Steel Prize and we hope to win it someday. We want to thank Northland and Robert Näslund who had the courage to invest in this new and revolutionary technology, which led to the realisation of this concept.”

The company also recently hosted a visit from the Intermodal Project Consortium, an alliance of 14 partners from eight different countries who work together with the goal of promoting Building Information Modelling (BIM) as tomorrow’s way of designing railway terminals. Visitors were given a guided tour of Kiruna Wagon’s workshop, where the Hermes bulk wagon and unloading station were demonstrated.