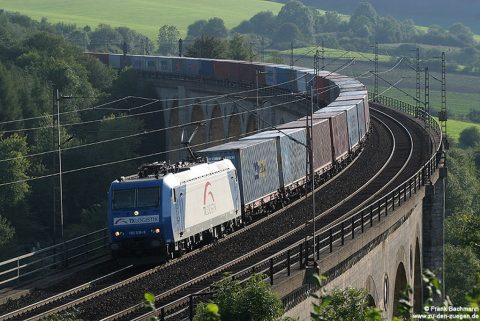 Combined transport is still the main driver for freight movements in Europe, while rail’s modal split share is strongest in Central & Eastern Europe, says the International Union of Railways (UIC). The ‘2016 Report on Combined Transport in Europe’ also includes feedback by rail freight stakeholders on the areas they believe needs most focus.

Prepared by the UIC’s Combined Transport Group, it says the market segment of international combined transport – where the major part of the journey is by rail or water and any initial and/or final legs carried out by road are as short as possible – measured in TEU (twenty foot equivalent unit) remains strongest, up six per cent between 2013 and 2015.

The report provides a thorough insight into the European combined transport industry between 2005 and 2015, and is a valuable tool for stakeholders and other parties in understanding the sector in terms of market structure and volumes.

In addition to general market information featured in previous editions, the 2016 report includes some of the topics currently under discussion in the European railway environment, such as the harmonised implementation of the Rail Freight Corridors and its likely impact on the further development of the combined transport. It also includes a spotlight on the development of the hinterland market and seaport activities; technology and digitalisation; and development of the market in the eastern Mediterranean region and onto Russia.

It shows, at a glance, how rail’s modal split of the freight transport sector was particularly high in central eastern (Switzerland, Czech Republic) and north eastern (Sweden, Finland, Estonia, Latvia and Lithuania) Europe, with all of these countries having more than a 25 per cent share. Germany, the Czech Republic, Hungary and Romania were in the 18-25 per cent range, with the UK, France, Italy and Belgium all within 12-18 per cent.

In contrast, southerly countries such as Spain, Portugal, Greece, Turkey, Macedonia and Bulgaria, along with The Netherlands and Ireland, had less than a five per cent share.

The UIC also asked stakeholders for their feedback on a range of freight and intermodal issues, including digitalisation and new technology in the sector. Questioned as to which areas future investments in innovative technologies should focus on, more than half (58 per cent) agreed new wagon types were a priority. Another question asked about new handling systems for container transport, for which 44 per cent ‘agreed strongly’.

Eric Lambert, UIC Combined Group Transport Chairman, said it once more showed the ‘continued expansion’ of combined transport across Europe. “The European economy is already shifting to greener modes of transport, and this process now needs to be supported by meaningful action,” he said. “2016 was a year of consolidation for continental and maritime volumes, but also – indeed, especially – a year of growth for intercontinental markets, particularly as regards traffic to and from China,” he added.

The UIC Combined Transport Group aims to develop co-operation at international and community level between all railway undertakings, with a view to advancing and promoting intermodal techniques and making them reliable, competitive and better suited to the requirements of the market and the environment.

The full report can be downloaded from the UIC website.