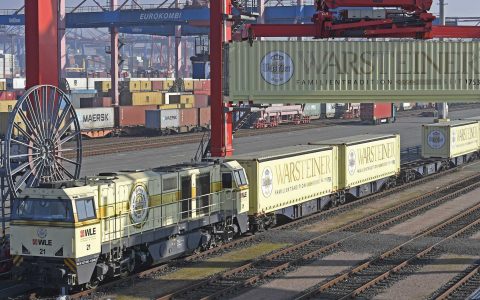 The Port of Hamburg moved 46.4 million tonnes of rail freight in 2016, its largest ever annual haul, boosted by a new ‘beer train’ which offers other shippers a chance to benefit. Set against a general trend of lower freight volumes for Germany in general, Hamburg saw a one per cent rise on the previous year.

Port officials said the figures showed that in the face of ‘stiff competition’ with the other northern Europe ports, its performance demonstrated an ‘especially good trend’ for its seaport-hinterland services.

Over 200 trains now depart or arrive every day at what is Europe’s largest rail port, a figure boosted by a partnership between Warsteiner, one of Germany’s largest private breweries, and booking partner Conjoin. Since last year they have offered a direct container block train service, operating several times a week between Hamburg and the North-Rhine Westphalia (NRW) region, traditionally the manufacturing heartland of Germany.

In addition to containers loaded with Warsteiner’s own beer and seaborne containers, these services also offer spare capacity to other shippers to move goods on swapbodies – a lighter type of container – as part of the intermodal traffic between Warsteiner’s own terminal in Westphalia, some 300 kilometres away, and the Eurokombi terminal in the Port of Hamburg.

Conjoin handles the marketing and bookings, and together with Warsteiner they are offering environmentally-friendly transport logistics technology for all companies in NRW and forwarders in the Hamburg area.

Ingo Egloff, Joint CEO of Port of Hamburg Marketing, said: ‘We have once again been able to boost the proportion of freight being transported by rail. In 2016 freight totalling 46.4 million tons (up by 1.5 per cent) and 2.4 million TEU (up by 2.4 per cent) was transported by rail into or out of the Port of Hamburg. Hamburg is further extending its position as Europe’s leading rail port.

“We are delighted about this record result. In this context, Warsteiner Brewery’s freight transport scheme is an outstanding example of sustainable corporate initiative,” he added.

Ulrich Brendel, Technical Director for Warsteiner Brewery, said: “Offering a high level of service and low environmental load, we have been able to organise future-oriented freight transport logistics to link our region with the seaport. Along with our existing Munich and Berlin rail services, we are delighted to have this new port destination that naturally provides perfect service for our beer export business to 60 countries throughout the world.”