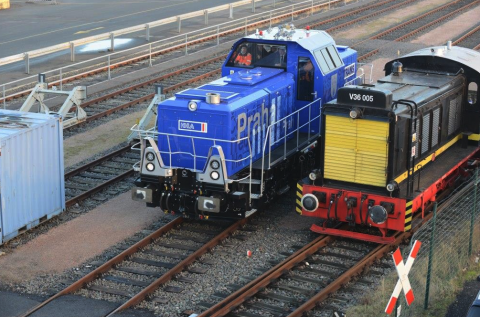 Rail capacity at the Port of Hamburg is being strengthened with a second shunting locomotive put into operation by Metrans, a subsidiary of Hamburger Hafen und Logistik (HHLA). The new locomotive is powered by environmentally-friendly hybrid technology and boasts a range of emission-cutting features.

Named after the city in which Metrans was founded, ‘Prague’ is Metrans’ fifth shunting locomotive, and will be used to handle the growing shunting volumes at what is now Europe’s largest rail port.

The Prima H3 locomotive from Alstom produces up to 50 per cent less CO2 than conventional shunting locomotives thanks to its hybrid engine. It also cuts emissions of other harmful substances such as nitrogen dioxide by up to 70 per cent. Depending on the assignment, it can run on battery power for between 50 and 70 per cent of the time it is in operation, halving fuel consumption.

Roger Mahler, Managing Director of Metrans Rail (Deutschland, said: “We started shunting Metrans trains ourselves at the Port of Hamburg in October 2013 to optimally manage this part of our transport chain as well, and to offer even greater reliability.

“Since then, demand for our reliable services, which we also provide to other companies, has risen continuously. So I’m very pleased that we have “Prague” as another shunting locomotive that combines performance with environmental responsibility. This makes it a perfect match for our company.”

It follows the recent expansion of the HHLA container terminal at the port, when the number of station tracks were increased from seven to nine. This was a complicated process, as the tracks had to be built more closely. Lanes for special vehicles were ‘overbuilt’, and this means the ‘checkers’, who have previously travelled aboard the wagons are now checking the car and container numbers on-screen. This has increased capacity by 140,000 twenty-foot equivalent units (TEU) to around 930,000 per year.

Dr. Stefan Behn, Board Member at the Board of Hamburg Port and Logistics, said: “With the expansion of the station, we are not only securing the performance of the CTA. We are also well prepared for further volume shifts on the railways and strengthen the railway port of Hamburg.”