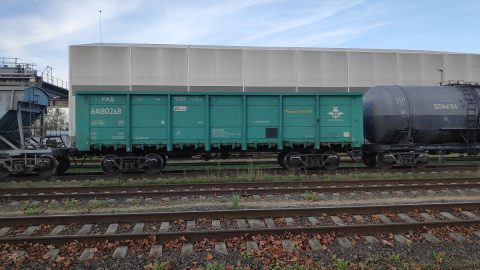 Published on 08-11-2022 at 06:05
Image: one of the wagons stopped in Kybartai. Valstybės sienos apsaugos tarnyba

The Lithuanian State Border Guard Service stopped and sent back five empty wagons with the symbols of the Russian Airborne Forces coming from Guryevsk, 20 kilometres from Kaliningrad. The five wagons were part of two convoys, three on one and two on the other, on their way to Tolyatti, 300 kilometres south of Kazan, in southwestern Russia.

They were stopped at the Kybartai checkpoint, on the Lithuanian border with the Russian exclave, on 3 and 4 November. The motto of the Russian Airborne Forces, ‘Nobody But Us’, was on the wagons, together with their logo. As the Lithuanian State Border Guard Service posted on Facebook, the wagons were unhooked from the convoys and ordered to be sent back to Kaliningrad.

The Community of Railway Workers of Belarus’ Telegram channel, belzhd_live, added that the wagons were empty because the trains were actually returning to the Russian mainland. The previous journey saw the convoys, loaded with 65 tonnes of ammonium sulphate, leaving Tolyatti on 17 October and reaching Guryevsk on 27 October.

Ammonium sulphate is most commonly used as a fertiliser, but it does have a dark side as well. For example, the substance was banned in Pakistan (2009) and Afghanistan (2010) because there were suspects of them being used by militants to make explosives.