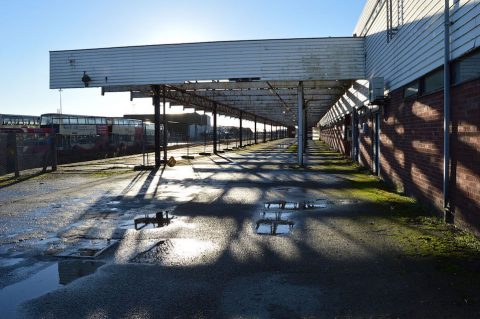 A station on the south coast of England is to permanently close on Saturday to allow future freight developments. Newhaven Marine will close on Saturday 26 September, after a lengthy legal process. The total number of passengers who will lose their local service is … zero.

A passenger station on the south coast of England, with capacity for trains up to twelve coaches in length and locomotive run-round faculties, and provision for cross-platform connections to international ferry services is to close on Saturday, 26 September. However, except for a few curious enthusiasts, the passing into history of Newhaven Marine will be an inconvenience for nobody at all.

This station has not existed for years

Petitions have not been raised. Protests have not been staged. There is no final farewell special departing from the platform, and the concourse is not full of sombre dignitaries and disappointed locals, fearful for the economic future of their community. This lack of activity and complete absence of civic outrage is down to one thing, and one thing alone: Newhaven Marine has not existed since 2006. It is a ghost station, an ex-station. Most people know a dead station when they see one, and anyone standing outside Newhaven Marine is looking at a dead station.

Except, no one can stand outside Newhaven Marine. The site has been closed to the public for years – decades in fact. Even if you could, the historic facade of the London, Brighton and South Coast Railway terminus, inviting passage to the capital of England by direct train, and the capital of France by ferry and fast connection, has long since been cleared away.

Traffic collapsed and so did the station

The canopies that sheltered cross-Channel voyagers have long since collapsed onto the platform that stretches north, almost to the horizon, pointing the way to the bustling metropolis. At least, they would have collapsed, had they not been demolished long ago. No last train either. At least not one that anyone could find on a timetable, nor indeed could anyone get on board. Newhaven Marine was erased from public schedules over fifteen years ago, and any would-be passengers were treated like stowaways, and strenuously invited to leave the train at the previous stop.

Now the signals have finally fallen to halt for the last time on Newhaven Marine. Yet, unlike so many south coast stations, mourned in song and verse, there is no plaintiff fanfare for this forsaken halt. Incredibly, this passenger terminal, which has seen the rich and famous use its extensive concourse, will pass away on Saturday, to facilitate the revival of bulk rail freight handling, and possible intermodal expansion. No more high-class passengers, rather working class 66 locomotives will squeal to a halt.

Ghost train for a ghost town

How can this have come to pass? Well, there is some history. Superseded as it was, by Newhaven Town, when that station gained its own ferry berth, the writing has been on the wall for Newhaven Marine for some time. That writing has been a notice of closure. However, Britain being Britain, nothing is that simple. Despite a case for closure that absolutely no one opposed, the procedure for closing a station in Britain is complicated and lengthy, in order to protect communities from loss of service in all but the most compelling circumstances.

While that process goes through several levels of hearings, including a debate in parliament, trains have to continue to run – even if no passengers use them, and no publicity is provided. These Parliamentary Ghost Trains are a celebrated part of British culture. There are a handful of them around the country, attracting a small band of enthusiasts. Not so with Newhaven Marine though, where access is forbidden – for safety reasons (remember those collapsing canopies).

Passing into history as freight takes over

Now the death-knell has finally fallen. The parliamentary vote has been taken and the only future cross-Channel traffic from Newhaven Marine will require cranes and reach-carriers, not the waiting taxi, which dutifully coveys would-be passengers at the appointed time of the Ghost Train. Long live the Newhaven Freight Terminal.

There is one other overriding reason for the approval of the closure of Newhaven Marine. The local community – of which there is none – face what could hardly be described as a long and arduous trek to the next station. The only way to now access the national network is a walk. A broad and well lit boulevard has to be negotiated in all weathers, with only a well signposted route to help them. The length of this hike? Approximately two minutes. Somewhat shorted than the walk along the length of the Newhaven Marine platform in fact. Trains from Newhaven Town could almost park with either end in both stations. Maybe a slight exaggeration, but it’s no exaggeration to say that sometimes a closure doesn’t really deserve a song and dance. This particular coda is one of them. The rest, as they say, is silence.

Main image is Alex Nevin Tylee’s plaintiff study of Newhaven Marine, just before it collapsed. We don’t know how he gained access – we’re not asking.