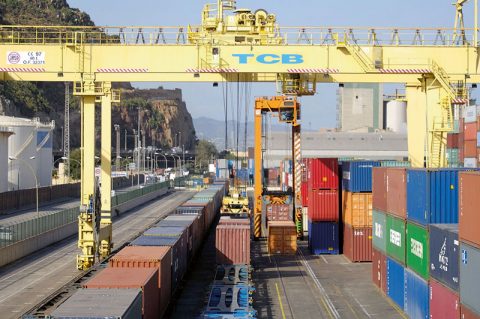 A rail freight service from Le Soler, in the south of France, to Barcelona Port started on March 15. It is the first 700-meter length train operating on this line, and it is catered to the transportation of cars. The service is managed by Deutsche Bahn and Renfe, which use a railway track designed for high-speed passenger trains for the service.

There are already nineteen rail freight services using this railway line, however, this is the first with over a 450-metre length, the traditional length for Spanish rail freight convoys. The new service comprises of 22 wagons per train, carrying 250 vehicles manufactured in Kornwestheim, a town close to Stuttgart (Germany).

The train does not need to be transferred from one railway track with European gauge to another with Spanish gauge, reducing considerably the journey time. Renfe noted: “This service will drive down the transports costs and the carbon footprint, with each service taking 42 trucks off the road.”

The service moreover adds more handled tonnage to Barcelona Port, which has been losing traffic in favour of Valencia in the last years due to delays in completing the Mediterranean Corridor. Thus, Barcelona Port moves forward to being one of the exporting hubs of the Mediterranean region, increasing its rail freight connections with automotive factories in France and Germany. In this, it is taking advantage of its traditional sea-shipping services for cars manufactured at Seat´s (Volkswagen Group) factory in Martorell, 35 kilometer from Barcelona.