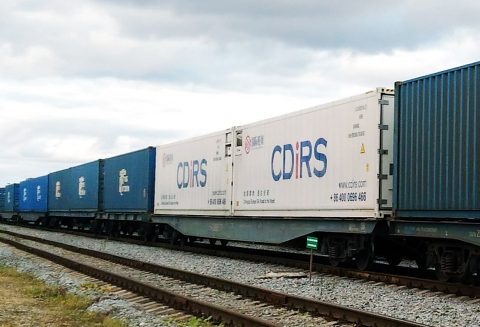 The perennial consumer favourites of chocolate and confectionery are inspiring a new expansion by JSC RZD Logistics of its regfrigerated container service for goods requiring special temperature controls. Part of a framework initiated by the state-owned Russian Export Centre, this project by JSC RZD – a key multimodal carrier in the Baltic/CIS region – is designed to support export-oriented companies moving goods between Russia and China.

The first high-speed container train with universal and refrigerated containers on the new export-import circular route Vorsino-Chengdu-Vorsino has already made the trip, carrying a host of famous Russian sweets such as chocolate brands Alionka, Babaevskiy, Artpassion, along with Korovka, Gusinye and Lapki confectionery, and various wafers, caramel and cereals.

Departing from the terminal Freight Village Vorsino in the Kaluga region, about 100 kilometres south west of Moscow, the refrigerated containers with confectionery products travelled to the border point of Zamyn-Uud (Mongolia), where they were transshipped on an oncoming train with imported cargo from China and then moved to Chengdu. From there, the Russian sweets were transported by cars to Shanghai and Guangzhou.

Viacheslav Valentik, CEO of JSC RZD Logistics, said: “The Chinese party is interested in the development of non-resource export as much as Russian manufacturers are, so it is quite natural that our railway service is developing at high speed. We are ready to provide Russian exporters and Chinese importers with all necessary assistance to facilitate their cooperation. For example, specially for this shipment, the specialists of RZD Logistics undertook the preparation of permitting documents necessary to operate the refrigerated containers of our foreign partner – CDIRS, Chinese provider – in Russia.”

Nikolay Kruchinin, General Director Freight Village RU, added: “This container train has become a reality thanks to TransContainer, which has provided use of its platforms and containers. Over the past few years, Freight Village RU has worked in close cooperation with TransContainer, which is supporting these newly established container services by providing its rolling stock.”