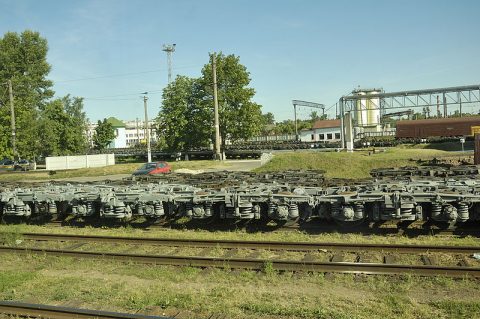 A 118 kilometer section of railway between the Polish cities of Siedlce and Terespol will be modernised, in an effort to improve the technical parameters of a line that directly connects to the most important border station between Poland and Belarus.

The Terespol/Brest border crossing is the main gateway of rail freight traffic between Europe and Asia. It is an element of the North Sea-Baltic TEN-T line connecting western Europe via Berlin and Warsaw with Moscow. With a declining domestic market, Eurasian rail freight traffic is becoming increasingly important for Polish railway companies. The expected increase of freight volumes via this route poses a big challenge not only to carriers but also to infrastructure operators.

“We are planning to upgrade the track and reinforce engineering facilities. Thanks to that it will be possible to route freight trains with an axle load up to 22 tonnes, improving the competitiveness of rail freight traffic across this border”, said Mirosław Siemieniec, press officer of PKP Polskie Linie Kolejowe. The works are due to be completed in 2020.

In addition to modernising the railway leading to the border crossing, transshipment terminals will also be upgraded. One of the main investments in this context is the reconstruction of the station of Kobylany, operated by Cargotor (subsidiary of PKP Cargo operator). Cargotor aims to increase daily capacity of the terminal, also by enabling the operation of longer trains. In addition, it considers transferring the customs clearance procedure from Terespol to Kobylany.

The border crossing in Terespol marks the switch from the European-gauge railway to the Russian-gauge track. In the area nearby the border, there are a few transshipment terminals operating on a 1435 and 1520 millimeter system. Infrastructure manager Cargotor is managing around 170 kilometer of tracks with stations in Małaszewicze, Bór, and Kobylany.