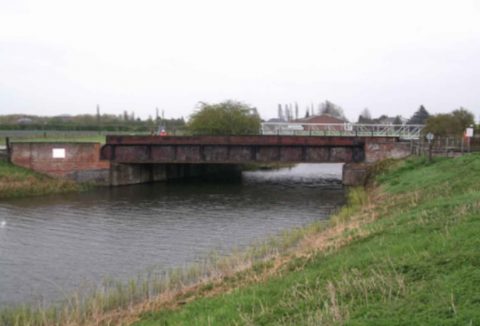 The railway bridge in Vernatts Drain will be demolished and a new, ready-made bridge will be installed to allow the passage of heavier rail freight trains. As a consequence, railway traffic on the eastern Britain line between Spalding and Sleaford will be diverted from 21-24 October.

Network Rail workers have been on site since July, but the main piece of work will begin on Saturday the 21st of October and be completed on Tuesday the 24th of October, said Network Rail. “Due to the nature of the work, no trains will be able to run on the line.”

The works will affect freight traffic from Felixstowe to Doncaster, Rotherham Maborough and Leeds, as well as from London Gateway to Wakefield and Leeds. This is especially freight traffic carrying deep sea containers. During the closure on the Spalding-Sleaford section, freight trains are redirected via the East Coast mainline connecting Peterborough and Doncaster. However, gauge restrictions apply on this route, the infrastructure manager said.

A daily number of around 12 trains cross the bridge in each direction. This number is not expected to increase directly as a consequence of the bridge. However, the 1.7 million Euros (1.5 million pounds) project does benefit the freight industry, Rob McIntosh, route managing director at Network Rail points out.

“Demand for rail freight is set to grow by thirty per cent over the next decade and it is vital that we make improvements to our railway, so that we can cater for this growth and ensure we are able to provide a network which meets the needs of the economies and communities our railway serves.” The British rail freight industry contributes 975 million Euros (870 million pounds) to the nation’s economy every year.