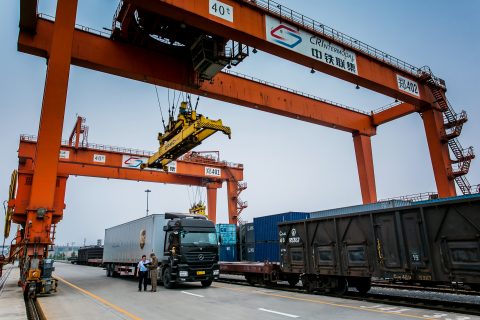 The growing demand for rail freight to and from the Far East has received another huge boost with logistics giant UPS’s decision to add six stations – including two in Europe – to its multimodal service between Europe and China. It said customers moving goods onto ‘the world’s largest trade lane’ would get more options to reduce supply chain costs and achieve a better balance between cost and time-in-transit requirements.

The multimodal service includes both Preferred Full (FCL) and less-than-container load (LCL) service options, with Duisburg (Germany) and Warsaw (Poland) now added to the existing European stops in Hamburg and Lodz (Pl). Changsha, Chongqing, Suzhou and Wuhan Stations have been added to the Chinese stations of Zhengzhou and Chengdu.

Cindy Miller, President of UPS Global Freight Forwarding, said: “Our China-Europe rail services can save customers up to 65 per cent versus air freight and improve time-in-transit by 40 per cent versus traditional ocean freight service. By giving our customers more options to balance cost and speed of delivery, UPS is committed to helping businesses in China and Europe succeed and expand.”

Duisburg lies in the heart of the industrial Ruhr area of Germany, and provides easy access to river, rail, road and air transport. The new Polish stop serves one of the European Union’s fastest-growing growing economies, and in Warsaw a centre for e-commerce, research & development and industrial manufacturing. The four new Chinese stations were chosen for their close proximity to provincial industrial manufacturing, commercial and cultural centres in China.

It is the latest in a series of recent rail freight projects linking Europe and China, confirming that long-distance freight options to the Far East are fast becoming an attractive option for many firms seeking to establish and consolidate east-west trade relationships.

In January the first direct train from China to the UK arrived in London after an 18-day journey across Asia. Last month Kuehne+Nagel launched its new ‘Eurasia Express, linking China and Germany via Poland and Russia, while just last week Germany trimodal provider Contargo sought to promote a direct connection to the China overland route with a new connection between the Ruhr region and the Swiss City of Basel.