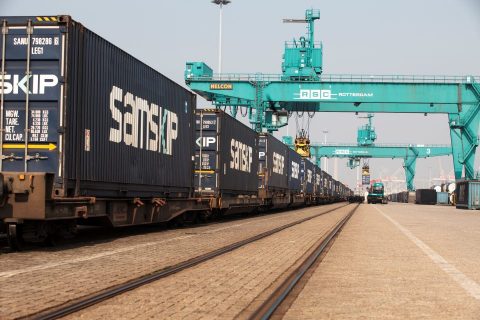 Lying on the western border of Romania, Curtici is a major junction in the central European railway network that connects to the capital Bucharest. Starting on January 1, this new multimodal service will offer competitive transit times compared to road, enabling shippers to transport cargo from Curtici to Stockholm in four to five working days.

Freight rail services in Romania have developed considerably in recent years, with investments including a new international link to Bulgaria across the Danube as part of the Pan-European Corridor IV, and the reconstruction of the line linking the Constantza Seaport with Bucharest. Curtici offers a ‘turntable’ for central & eastern Europe hinterland transport and is a vital gateway to western Europe.

Max Kindler, Business Unit Manager at Rail Cargo Group Intermodal, said: “Rail Cargo Group is delighted to enter into this broad cooperation with Samskip Van Dieren, as the two companies will be the first to offer an end-to-end connection between Turkey and Scandinavia, combining Rail Cargo Group connections between Turkey and Romania, and Romania and Germany, with Samskip’s network from Duisburg to various destinations in Scandinavia. The new offer to the market comes in high frequency, in very competitive transit times and at attractive price levels.”

Initially the Duisburg-Curtici shuttle has a scheduled four round trips per week but, by providing a more attractive option to road haulage, the partners are confident that the new route will stimulate an increased flow of goods between the two regions. Samskip and RCG expect to quickly extend it to five round trips.

Shippers will benefit from a seamless terminal-to-terminal service, with a single Samskip point of contact dealing with the entire transit across the rail network via the Duisburg hub. Samskip also provides shippers with a user-friendly online portal to manage bookings and monitor the progress of shipments through the network. The system also generates automatic departure and arrival notifications to provide reassurance to customers.