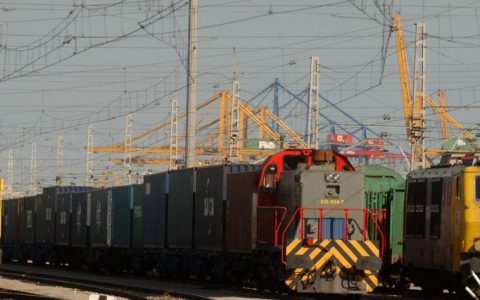 A new modern freight corridor is being forged in eastern Spain as the result of a 50 million Euros investment in improving the rail cargo connection between Valencia and Zaragoza. It is part of a wider 100 million Euros funding package for local ports’ rail links over the next four years.

Existing infrastructure means that freight journeys between the Port of Valencia (PAV) and Zaragoza currently take around eight hours and 30 minutes, with no possibility of night services and the strong possibility of delays if there is bad weather. The improvements will help cut the journey time by around two hours, bringing it almost in line with passenger services using the same route.

The 2017 Investment Plan outlined by both ports’ respective regional governments will provide 31 million Euros for improving rail access to Sagunto, 17 million Euros for sidings in the stretch to Teruel – part of which is for ensuring the longer 750 metre trains can be accommodated – and three million Euros in 2020 for a railway station to support the Port of Sagunto.

In a joint statement, Ximo Puig, President of the Government of Valencia, and Javier Lamban, President of the Government of Aragon (Zaragoza), said: “The level of investment to be taken by PAV will allow an improvement in the competitiveness of the use of the line and that it becomes an operational corridor and able to serve rail freight traffic between Aragon/Valle del Ebro and the ports of Sagunto and Valencia, as well as solving the bottlenecks in the road.“

Aurelio Martinez, President of the Port of Valencia (PAV), said: “Taking into account the fact that the Port of Valencia generates benefits, that the results are positive and that the growth prospects are reasonable, we have decided to invest – through the fund – in those infrastructures of connectivity that at the moment we consider a strategic priority. This highlights the connection of the Mediterranean with the Cantabrian in a project more than 90 years ago.

“Through the port, Valencia has excellent connectivity with world markets – more than 100 lines that connect us with almost 1000 ports worldwide. To guarantee interoceanic we have to gain critical mass, and Aragon wins a new and natural output to the sea.”

As well as enhancing port facilities, the investments are a major driver in pushing for an improved modal split between rail and road in Spain. A further eight projects are being pursued nationally, including ports at Barcelona, Cadiz, Algeciras and Seville. The funds are enabling port operators to work more closely with contractors carrying out land access works inland, as lines are gradually improved.