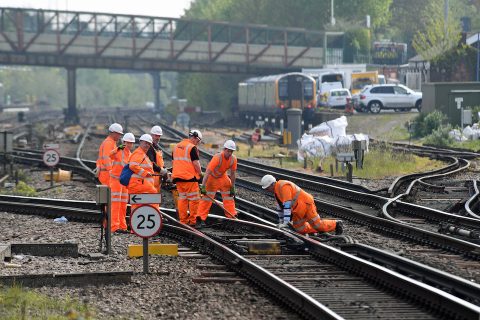 A week of talks to settle strike disputes in the UK

Strikes crippled the British rail network in the first week of January. The long-running disputes on the network combined into the most prolonged period of industrial action so far, with five consecutive days of stoppages. Now the second week is likely to be spent in talks between employers and unions. However, the hopes of a resolution have so far proved to be a false dawn, and there is concern that the entrenched positions are set for many months yet.

Normally it is a quiet week for rail travel, as business comes back to life after the Christmas and New Year break. 2023, however, was the quietest on record, as the long-running disputes swept away passenger timetables and caused problems for freight operators, despite that sector being largely uninvolved in the bitter disputes.

The biggest trade union in the UK railway industry has staged its biggest strikes yet in the increasingly acrimonious dispute over pay, conditions and job security. Their actions – two 48-hour stoppages in the past week by members of the RMT (Rail, Maritime and Transport workers) – mean the entire network has been closed or disrupted since late on the last day of December last year. Planned closures over the festive period ran on into an RMT stoppage called for Tuesday and Wednesday.

Any efforts to recover on Thursday were derailed by the drivers’ union Aslef (Association of Locomotive Engineers and Firemen) which pulled out its members on Thursday across most of Great Britain. “Anyone who was in any doubt of the importance of train drivers to Britain’s transport system, or of the effectiveness of industrial action, had their illusions thoroughly disabused”, said a robust statement from the union, which represents around 21,000 rail professionals. The RMT, which has around 40,000 members and is the biggest union in the industry then called out its members again on Friday and Saturday.

Freight operators have been on the fringe of this long running battle between the government mandated passenger train operators and the infrastructure agency Network Rail. However, they have not been unaffected. Official statistical analysis from the Office of Rail and Road, in their latest quarterly review, claimed that between thirty and forty per cent of freight movements had been compromised or cancelled during strike days. That figure would represent something around two hundred trains per strike day failing to run.

In previous decades, disruption in early January may have been less of a headache for freight operators. Bulk movements – including large loads of coal – would be stockpiled ahead of the festive period. However, the pattern of traffic today, with an emphasis on intermodal, is a year-round operation. That has manifested some discontinuity of supply, especially in fast-moving consumer goods, which has seen some gaps on supermarket shelves.

Now, despite increasingly acrimonious public exchanges, the sides in the dispute are on the verge of intensive talks in this week. The UK government has been extremely reluctant to get around the negotiating table. The line from the Department for Transport, and the various transport ministers over the past year, has been that the burden of resolution lies with the operators and their representative body, and Network Rail.

However, the prime minister Rishi Sunak – Britain’s third prime minister since this dispute began – has waded in, and effectively said government is ready to get directly involved.”We want to have a grown up, honest conversation with all union leaders about what is responsible, what is reasonable and what is affordable for our country when it comes to pay”, he said. “We think that those conversations should happen. That’s why we’ve invited everyone in to have those talks on Monday and I’m hopeful that those talks can be constructive.”

No further action has been announced by either the RMT or Aslef. However both unions have taken steps, so that they comply with legislation which would allow them to enter into further industrial action in the coming months.