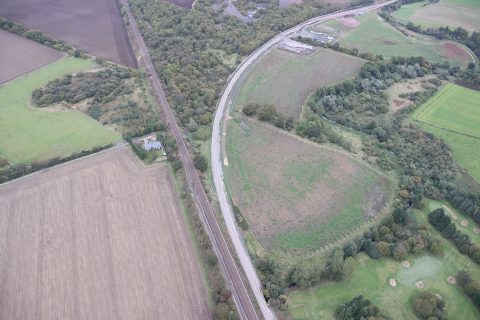 A new fly-through video shows Scotland’s short but significant Levenmouth rail project snaking its way towards completion. The lines are now being laid to see services reintroduced on a moribund stretch of line through Fife in the east of Scotland. Station plans have been submitted for approval, and there remains the possibility of modern freight services replacing the former coal traffic that served a now decommissioned power station.

The planned opening of the Levenmouth branch in Scotland is now just over a year away, and there is tangible evidence on the ground of progress, including the very welcome sight of engineering trains delivering ballast, rails and ancillary materials for the construction phase. The reinstatement of the Levenmouth branch line is intended to provide the area with a much-needed boost to economic sustainability and connectivity.

The branch line, which was once the southern end of a line snaking around the Fife coast, will serve what is recognised as the largest single urban area in Scotland. That is a claim very much contested by campaigners in other parts of the country, who continue to lobby for further rail development. However, no one is begrudging Cameron Bridge and Leven their new stations. Campaigners at the northern end of the former line hope that their lobby may be just as successful and that the famous golfing resort of St Andrews will rejoin the network too.

“We have now developed and submitted planning applications for both station sites”, said a statement from the Scottish government’s rail agency – Scotland’s Railway. “Following this, we will construct the facilities that will serve as the gateway to the rail network for the local communities denied access to passenger services for more than five decades.”

Freight and future proof from day one

Hopes remain that the Levenmouth branch will see freight traffic beyond the necessary engineering trains currently employed in the construction phase. The line did serve a distillery and bottling plant, which will still be on the route, with the possibility of reactivating its rail connection. There is longer-term hope that the modern industry of Methil Docks could use rail freight.

Light logistics would also be a useful addition to the fully electrified double-track line. Campaigners have welcomed the installation, from day one, of wires and double track. Some other recent projects, notably the Borders Railway, were not so fortunate. The Campaign for Borders Rail continues to criticise the Scottish government for building ‘down to a budget’ on that line, which makes freight operations impossible and jeopardises expansion and extension to Carlisle.

Hopes are that with the Scottish government committed to its own very ambitious net-zero carbon targets, a reappraisal will be forthcoming, taking greater account of rail freight capacity across the country. For now, the Levenmouth line gives tangible proof that the tide is turning, and building in capacity from the start is now the core service level.