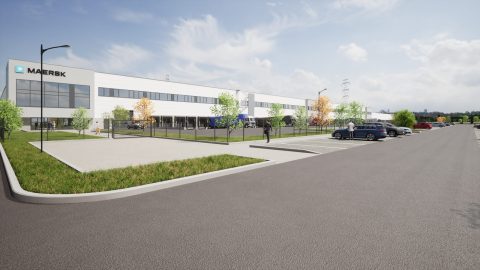 Maersk’s new mega-warehouse in Duisburg will not exclude rail

A major shipping company, a hub and a new large warehousing facility promise to offer end-to-end logistics solutions on a trimodal basis. Maersk will start constructing a new 43,000-square metres warehouse in Duisburg, which, among others, will have direct access to rail freight services.

“Now that the building permit has been issued, the construction of a new warehouse will begin in Duisburg, one of the largest inland logistics hubs in Europe,” commented Maersk.

“We are thrilled that we will soon be able to offer our diverse logistics solutions to our customers at this key crossroads between Western European markets,” said Jens-Ole Krenzien, Maersk North Europe managing director. He also added that building the new warehouse resulted from the need to offer more integrated services to its customers, combining different logistical solutions and transport modes.

The new warehouse will be constructed within Duisport’s facilities, in a property covering 110,000 square metres in total and with an expansion capacity of up to 50,000 square metres. According to Maersk, the facility will handle up to 32,000 40-foot containers annually. Goldbeck International will be responsible for its completion, which is due by the third quarter of 2023.

What is more important than the facility’s size is its location. Duisburg has long been considered one of Europe’s most significant hubs, if not the most significant. It owes its reputation to its proximity to the German Ruhr industrial area, the northern German ports, and the Benelux. In fact, it is a logistical crossroads by definition.

One of its main characteristics is the ability to serve all transport modes. It is a powerful port with barge connections to other major hubs and equally crucial overland links by rail, which extend all the way to Asia. Maersk aims to utilise these features and position itself in the centre of Europe and Eurasia.

“All modes of transport come together here – inland barges on the central Rhine waterway (connecting to the ports of Antwerp and Rotterdam), major railway lines (to the ports of Northern Germany), and trucks via the main road axes of some of Western Europe’s largest economies,” underlined Maersk. Krenzien concluded that the warehouse’s highest value will be the “significantly increased speed for the customers by enabling them to bypass their European gateway or stock-keeping warehouses.”