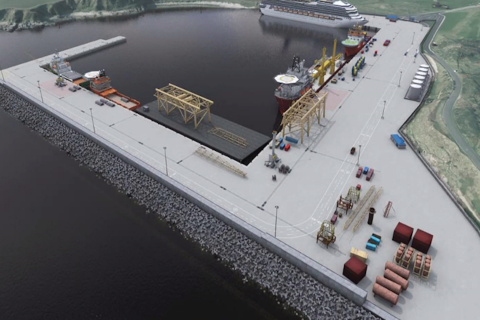 Aberdeen is expanding its maritime activities, and rail freight is set to play a central role. Existing rail freight facilities will see a new lease on life as Aberdeen Harbour plans a massive expansion. The Aberdeen South Harbour, as the natural shelter of Nigg Bay will be known, will be connected to the lineside facilities at the nearby Tullos Industrail Estate.

Aberdeen, the city on Scotland’s north east coast, and for so long synonymous with North Sea oil, is to vastly expand its much longer seafaring reputation. The Aberdeen Harbour Board, the oldest incorporated commercial company in Britain, has unveiled plans for the biggest expansion in its 900-year history. Key to the development will be rail freight, which will provide sustainable and commercially attractive onward distribution.

Aberdeen Harbour, already the second busiest port in the UK, measured by shipping movements, is set to vastly expand its integrated logistics offering. The existing port, primarily located to the north of the River Dee, is already served by rail. The city’s Waterloo terminal currently handles traffic generated by the port, including the recent long-distance flows to Lincolnshire, supporting the paper making industry. The terminal also generates its own traffic, including intermodal operations.

The new Aberdeen South Harbour will however significantly increase that traffic, if potential is realised. The compact city clearly doesn’t need a significant increase in road traffic. “Rail offers important low-carbon connectivity opportunities which will further underpin growth at the new facility”, says Luigi Napolitano, the Harbour Trust enterprise and innovation manager. “Everything within the Harbour is integrated. We see Rail is an extension of our sea routes. The new port is not just an ambitious plan for Aberdeen. The new port is biggest maritime development in UK for many years.”

Napolitano explains the necessity of expansion, and how rail will facilitate the potential. “Our unique location at the heart of the city limits our capacity to expand North Harbour to accommodate these vessels, which is why we invested six years of detailed planning, public engagement and large-scale feasibility studies to expanding the port to the south of the current Harbour.”

The Harbour, says Napolitano, has significant experience with rail freight. The new facilities will connected to via a dedicated companionway. “The 350 million pound (385 million euros) South Harbour expansion is the largest marine infrastructure project underway in the UK, and the largest in Trust Port history. It will significantly increase opportunities and opens the door to new markets.”

With a planned maximum berth of 300m, the new harbour will not be quite big enough to handle the ‘golden class’ monster container ships, like the stricken Ever Given. That aside, the southern harbour will be well capable of tying up almost every other ship in the world. Aberdeen’s new harbour looks like it will have plenty need for those rail connections.