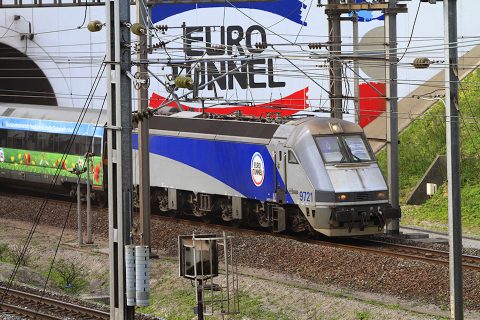 The pandemic and lockdowns in the UK and mainland Europe have a severe impact on Eurostar, the brand that runs trains between London, Paris, Brussels and Amsterdam. The operator is on the brink of financial extinction, after passenger numbers collapsed by around ninety-five percent. Now, the company is urgently seeking one or more bailouts in order to survive. However, what effect might that have on freight operations in the Channel Tunnel?

With passenger services in the Channel Tunnel radically reduced, questions are being asked about the viability of the fixed link between England and France. If passenger services were to fold, would that have a negative knock-on for freight services between the UK, Europe, and even Asia?

The potential collapse of Eurostar – the glamourous pin-up of Channel Tunnel operations – has caught the headlines in the UK. The twenty-seven year old operator, which only relatively recently was refitted with a new train fleet, and expanded services to Rotterdam and Amsterdam, has suffered the same precipitous fall in passenger numbers as every other operator in the UK and Europe. However, while the domestic operators have been underwritten by an effective re-nationalisation, Eurostar was left out. The operator is not part of the UK franchising system, and is in fact majority owned by the French state operator SNCF.

Eurostar was originally jointly owned by the state operators in the UK, Belgium and France, but it has long since been sold on, and the UK has no financial stake in the operation. For that reason, pleas for a bailout have been met with indifference from parts of the British public. Typically the more nationalistic end of the popular press has claimed that Eurostar is a French company and therefore a French problem. That’s not a universally shared attitude however, and there is some sympathy for the plight of the company, not least for its usefulness as an inbound tourism, business and investment facilitator.

Eurostar trains represent only a small part of traffic though the Channel Tunnel. Normally, shuttle trains carrying private vehicles or freight trucks represent the bulk of movements. Popular media reports often concentrate on the small number of Eurostar and bulk freight trains. However, the Tunnel is burgeoning with shuttle traffic. Getlink, the Tunnel operating company, say that in normal peak times, they dispatch a freight shuttle every eight minutes – a figure that has proven largely immune to the pandemic.

Bulk freight is more challenging. Despite the efforts of business development managers at freight operators, it has been a difficult sell to persuade the market to adopt the Tunnel instead of traditional truck-carrying ferries, or even short sea crossings, despite the additional handling logistics.

However, Shuttle services are operated directly by Getlink, which earns revenue from shuttle users – such as private travellers, commercial passenger operations, and freight hauliers. They also take fees from Eurostar and licensed rail freight operators, such as DB Cargo UK. Steel exports, aggregates and foodstuffs imports are the main bulk flows. China clays between Belgium and Scotland are a recent addition to bulk traffic.

Inevitably, Brexit has significantly affected traffic. Some freight operators have suspended their cross-Channel operations – at least temporarily. They cite the bureaucratic delays brought about by new customs requirements, now that the UK is outside the Single Market. With truckers required to have an access permit to even enter the county of Kent and approach the Channel Tunnel freight terminal at Folkestone, some operators have permanently switched away to ports elsewhere in the UK.

The future for tunnel rail freight

Whatever the future for Eurostar, it is unlikely that even a worst case scenario – collapse of the company – would prove directly detrimental to rail freight. Getlink, the tunnel operators, would suffer a loss of revenue, but the freight shuttle will remain the most frequent part of its operation. Passenger shuttles, currently heavily restricted, are aimed at a different market, so would not likely be affected.

Eurostar may have expanded into The Netherlands and as far as the Côte d’Azur, but regional services beyond London never came to pass in the UK. The Tunnel shuttle trains are too big for the loading gauges in both the UK and France. Shuttles are therefore restricted to round trips between the terminals in Kent and the Pays de Calais. Restrictions on parts of the UK network also mean that intermodal traffic through the Tunnel is restricted in the choice of destinations. A long-term gauge enhancement programme is underway in the UK, managed by the infrastructure agency Network Rail.

As far as Channel Tunnel rail freight concerned, a bail out is neither requested nor required, and perhaps in future freight will be the real star of the Tunnel.