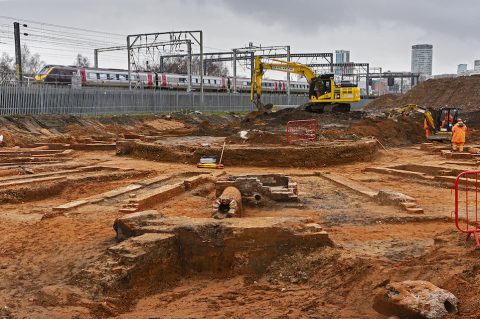 Past and present: HS2 digs into history while supporting 22,000 engineering futures

HS2, the huge high-speed rail infrastructure project intended to reshape the UK rail network, is to feature on British TV in a series following the archaeological finds along the London to Birmingham high-speed route. Today marks the official start of construction on the 100 billion British pound project (110 billion euro) and a drive to recruit up to 22000 workers for the project.

After uncovering a long-lost locomotive roundhouse at Curzon Street in Birmingham, the archeological credentials of the HS2 project have been in the spotlight. Now the entire 100-mile (160 kilometre) project is to be followed by TV cameras, for a BBC series chronicling the unearthed finds. The series begins later in September.

TV and archeological interest in tunnelling

There is plenty of unearthing to do. Much of HS2 is to be buried in tunnels or in deep cuttings, as a consideration towards social and environmental concerns. Particularly impressive will be the tunnels under the environmentally sensitive and nationally iconic Chiltern Hills, on the alignment north from London.

TV producers and archaeologists are eager to discover what finds may be uncovered. The area particularly in the rural parts of Buckinghamshire, have been settled since neolithic times, and have been home to indigenous tribes and invaders, including Norse, Roman and Norman influences. The massive earth moving and tunnelling operations will generate significant construction traffic, and keep the archaeologists busy too.

Less archeological and more historical, much has been said about the influence HS2 will have on the long-standing freight capacity issue in the UK. However, the construction phase will generate freight traffic in its own right. The project managers have pledged to use rail freight to mitigate road use as much as possible. Given the congested motorways around Birmingham, that will come as some relief to commerce and communities alike. Recently, deliveries by rail began at the Birmingham end of operations, with the construction site at Washwood Heath receiving the first of a decade-long timetable of 15,000 trains.

HS2 says that, by using rail freight resources, their project will avoid 1.5 million lorry journeys on Britain’s roads. The first of those, on 25 August, rolled in to the Washwood Heath Railhead site, managed by HS2’s main works civil engineering joint venture Balfour Beatty VINCI. The aggregates load came from supplier Rail Stone Solutions and their rail haulage partner GB Railfreight. Over the next four months, say HS2, more than 150 trains will bring up to 235,000 tonnes of stone from quarries in the English Peak District, equating to keeping an estimated 13,000 lorry movements off the road.

HS2 has been, for some time, emphasising its capacity enhancing role, particularly for freight traffic on the UK network. However, the ramp-up of work around Birmingham, while bringing freight services directly on site, has brought into focus the support for engineering in the region.

As evidenced by the archeological finds at Curzon Street, Birmingham and the West Midlands region has been an engineering heartland since the dawn of the Industrial Revolution. The one-time workshop of the world is still a centre of excellence in the field, and HS2 is supporting that continued legacy.

Next generation engineers and formal launch

The railway project’s partnership with The Social Mobility Foundation is currently five years old, but in response to the pandemic, activity has ramped up to help support the so-called ‘covid generation’ of students and young adults. HS2’s partnership with the charity has focused on providing work experience placements and individual mentoring to ensure that young people can access professional support when preparing for their next steps into education and employment. One local youngster, says the company, is set to embark on an engineering degree apprenticeship with The Dyson Institute of Engineering and Technology.

With the formal launch of contraction on 4 September, HS2 has announced a huge recruitment drive. With up to 22000 personnel required, the project will be a major contribution to the construction and logistics sectors. Quoting UK prime minister Boris Johnson, the project is placed at the heart of plans to build back better, and resuscitate the British economy. “As the spine of our country’s transport network, the project will be vital in boosting connectivity between our towns and cities”, he said. “HS2’s transformational potential goes even further. By creating hundreds of apprenticeships and thousands of skilled jobs, HS2 will fire up economic growth and help to rebalance opportunity across this country for years to come.”

HS2 has also adapted their summer work experience programme to provide virtual support to school and college leavers. who aspire to a future career in engineering. Richard Winter, HS2’s Education Manager says that will deliver huge benefits for future generations. “We’re focused on what we can do here and now to support young people through this hugely difficult time.”

Over 180 young people have benefited from work experience placements with HS2. With the regional heritage in engineering, and the coming of a new railway, HS2 may lay claim that the capacity benefits of the project may extend off the rails too, and make capacity for new engineers to serve Britain’s railways and beyond. Birmingham, in that respect, retains its workshop of the world credentials for future generations too.