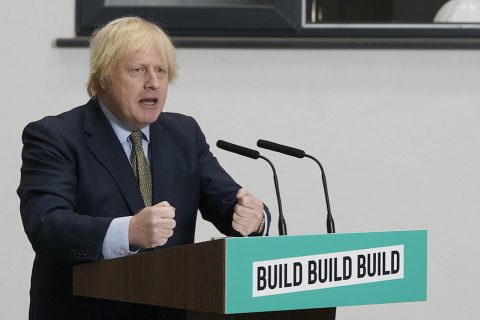 A programme of infrastructure development brought forward by the UK government today, can give the rail freight sector cautious optimism. A commitment to spread the current building boom around the country can provide opportunities for much needed stability and growth.

Prime Minister Boris Johnson has delivered a speech to the UK, saying that his government will deliver a speeded up and intensified version of their manifesto pledges of investment and infrastructure spending. In today’s RailFreight Live, an exclusive report will be broadcasted about this news.

The prime minister was speaking at a visit to an industrial site in Dudley in the West Midlands of England. The area was once the centre of the Black Country, Britain’s heavy industry heartland. However, while the region has struggled economically for several decades, and no longer echoes to the sound of innumerable freight trains, it is now better known for technical innovation and is also at the northern end of the HS2 project.

An initial investment of five billion British pounds (5.5 billion euros) was pledged by the prime minister to, as he put it, build back better, build back greener, and build back faster. Britain is suffering from the economic aftershock of the coronavirus pandemic, and he said that however this must be seen as an “absolutely massive opportunity”, to bring to the country many of the projects that have been neglected for decades.

The rail freight sector was not directly addressed at any point in the forty-minute address. However, much of what the prime minister delivered, had implications for the industry. Critically, the programme of building announced will require delivery of the raw materials necessary to complete, among others, a promise to build forty new hospitals and a ten-year programme of schools building.

Geographical balancing of the national economy was a recurring theme, but Johnson emphasised that this will not come at the expense of development in London, where a long-term building boom has underwritten much rail freight business during the twenty-first century. “We have a capital city in so many ways the capital of the world”, said Johnson. “Yet too many parts of our country have felt left behind as though someone had taken a strategic decision that they did not matter as much as the metropolis. I don’t mean impeding the success of London – far from it. We will unleash the potential of the entire country.”

In a stark reversal of policy from previous administrations led by the prime minister’s Conservative Party, there was an absolute rejection of the lack of public spending of years gone by.

The austerity, which was the response to the 2008 financial crisis, is off the agenda. “It’s time that the system recognised that talent and genius are expressed as much by hand and eye as by spreadsheet and essay”, Johnson said, in a pledge for industrial job creation.

In what was interpreted as a direct commitment to improving transport connections, the prime minister committed to “a massive new plan to build and rebuild those vital connections to every part of the UK. Now is the time to rebuild that incredible partnership between England, Scotland, Wales and Northern Ireland.”

Unlock Manchester to unlock the North

Johnson made specific reference to solving many of the problems that have blighted rail freight operations in the north of England. “Better road, better rail, unlocking the central Manchester bottleneck that delays services across the North.”

That pledge will sit well with groups who advocate extending the railway network, and must be especially encouraging for campaigners seeking a rebuild link between Manchester and the East Midlands, connecting the towns of Buxton and Matlock, and providing a direct freight route from the aggregates quarrels of the north to the markets and projects of the South East and London.

Conservationists may be alarmed at a commitment to significantly upgrade the main trunk road between London and Edinburgh – the historic A1. It does however represent a significant project opportunity for rail delivered materials, and it is indicative of the scale of project work planned by the government in response to the coronavirus crisis.

Several more commitments were made to infrastructure development. “Build, build, build”, said the prime minister. “If we deliverer this plan together we will build our way back to health. Stronger, better and more united than ever before”, he said, and concluded with a resolution that the country must first get down to the hard and painstaking work of restarting the economy.

More later in the week

The rail freight industry can now look forward to a more detailed presentation, later this week, from the UK chancellor, Rishi Sunak. The prime minister has charged him with leading what is being branded as ‘Project Speed’. In many ways, speed is exactly what the rail freight sector can deliver.

Do you want to hear more about the 740-metre trains in the Netherlands and surrounding countries? It will be the topic of discussion in today’s RailFreight Live. This will be broadcasted at 1pm on our YouTube Channel.