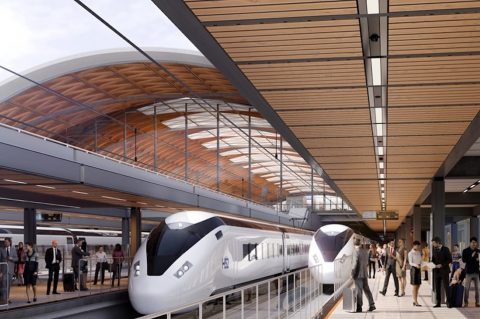 UK government: let the works on our high-speed line begin

Today, the UK Department for Transport has given approval to let the works on the country’s high-speed line begin. HS2 Ltd, the responsible company for the project of the the same name, may issue a Notice to Proceed to the four main works contractors. Irrespective of the appeal pending over environmental issues, this represents a significant milestone in the multi-billion pound project.

Following on from the publication of the Oakervee Review into the viability of the project, and the Government’s decision in February to continue with HS2, the Department for Transport (DfT) has now given formal approval for the management company to issue a formal Notice to Proceed to the four recognised Main Works Civils Contractors (MWCC). Those companies; SCS Railways, Align JV, EKFB JV, and BBV JV; can now commence full detailed design and construction of Phase One of the HS2 railway, between London and the West Midlands.

The news has been broadly welcomed throughout British industry. Maggie Simpson, director general of the Rail Freight Group, expressed the pleasure of industry at large. “We are delighted that Government has finally given the go ahead to start the construction of HS2. This decision is welcome news for many of our member businesses who will supply materials and engineering services to build this vital new railway.  At a time of ongoing economic uncertainty this is a shot in the arm for the rail freight sector”.

For the UK government, this represents a shovel-ready scheme which can support a large cross-section of industry. Mark Thurston, who heads up HS2 Ltd, said the announcement represents both an immediate boost to the construction industry and the UK jobs that the industry supports. He called it an important investment in the future of Britain. “Levelling up the country, improving our transport network and changing the way we travel to help bring down carbon emissions and improve air quality for the next generation”.

Some commentators have raised concerns over the announcement, particularly at this time of crisis. On the economic front, some think tanks have questioned the ability to pay for the project, given the very large cost of combatting the coronavirus crisis.

One commentator, Matthew Kilcoyne of the Adam Smith Institute – a free-market economics think tank – told BBC news the government’s announcement was ‘tone deaf’ in the light of the coronavirus pandemic. It is worth noting that the story, which would almost certainly have been a lead item a couple of months ago, did not even make the first thirty minutes of the broadcaster’s flagship bulletins.

It will take years, possibly decades, to deliver the entire HS2 network, which eventually should connect most of the biggest cities in the UK directly to a a new rail network, freeing capacity for other, much needed services, including a radically expanded freight network.

While certain environmentalists will remain deeply unhappy with the news, and there remain questions raised over the cost of the project, this is nonetheless long awaited news that has come as a shot in the arm to UK industry, at a time when everyone is longing for a shot in the arm. Whether or not it proves to be a vaccine for the UK economy remains to be seen.