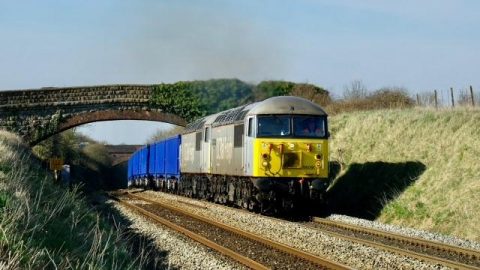 Rail freight operators who have adapted best to the radical changes brought about by Coronavirus crisis are seeing busy timetables and order books. Many operators agree that the answer to the crisis is to keep working hard.

“Since Saturday the team have been working remotely whilst delivering the busiest train plan ever for DCRail”, says David Fletcher, Director Rail of the parent company Cappagh Group.

Bulk on the move

The photographer, Eddie Holden, while observing social distancing, caught this story’s featured image earlier this week. As proof of intent, the working illustrated, coming over the peak of Warminster Bank in the south west of England on Monday, is carrying 1,400 tonnes of recycled rail ballast to L&S Waste Management in Southampton, where that company has a dedicated aggregates processing facility.

The flow began operations about 18 months ago and receives up to two trains per day. The aggregates are used in the local construction market. “The leading loco shows the external signs of a few weeks hard work but will be cleaned at the next exam”, says Fletcher, ever proud of the turnout of the fleet.

To keep operations moving, Fletcher says the company has responded as quickly as possible to the new necessities of social distancing. “We moved our whole operation to remote working within five days”, he said. “We have changed shift patterns to increase isolation and taken measures to reduce use of hotels and public transport”.

With the hospitality industry among the hardest hit by the lockdown imposed across the UK just over a week ago, Fletcher says, with some understatement, that it has not all been easy with particular difficulties finding hotels for operation staff. He is aware that there has been considerable cooperation from his colleagues in the field. “Thank you to all the DCRail team and also Network Rail for constant efforts to keep the network open”, he said.

The interconnection of the economy is well illustrated by the comments from suppliers and customers. Steve Kew of L&S was brief, but to the point, “Thank you for the service you gave this week”, he said.

While the picture changes on a daily basis, there is evidence that businesses are already preparing for a resumption of near-to-normal operations just as quickly as possible. “We shut the gates on Tuesday until further notice”, said one bulk commodities customers. “When we go back we’ll need another 1000 tonnes at least”.

“Last week we had trains operating from Carlisle in the North, Neath in the West, Boston in the East and Southampton in the South”, says Fletcher, covering all points of the compass. “Not only were we moving bulk products but we were undertaking passenger stock moves in London and supporting other freight operators with driver hires”.

Cappagh Group has a long-term plan to increasing the use of rail freight. Present circumstances have proved to be an impediment to expansion plans, but the company has responded well. “The planned investment in new rail freight capacity will provide environmentally friendly and efficient supply chain solutions for customers of the Cappagh Group”, says the company. Right now, their willingness to adapt can be seen as a model for the future, not just of the sector, but for economic activity in general. That way, we will all have an opportunity to scrub up at our next exam, after a particularly hard tour of duty.