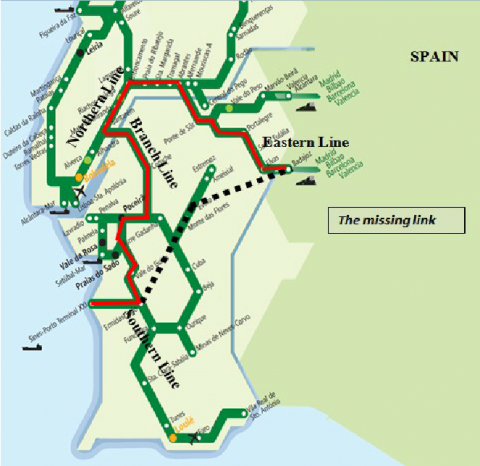 The Portugese government will in March launch the civil works public tender for the rail freight corridor between Sines and Setubal ports and the Spanish border.

This project has three key strands: the rail track between Evora north and Freixo, which has a 70 million Euros budget; the line between Freixo and Alandroa (105 million Euros); and between Alandroal and Linha do Leste (220 million Euros).

The Government of Portugal will invest 264 million Euros, with the European Union contributing 158 million Euros through the Connecting Europe Facility initiative. The new rail network will be 100 kilometres long.

Currently the Sines port can loan a total of 36 trains of the 450-metre length variety every day. This latest project will increase that capacity to 51 of the 750-metre train type.

Portugal expects to complete the civil works in 2020 and to start rail freight services in 2021. This infrastructure was agreed by Spain and Portugal at their XIX Summit, which took place in Figueira da Foz in 2003. The Portuguese government highlighted that this infrastructure is the most important seen for decades.

As previously reported on RailFreight.com, Sines and Setubal ports are the ideal sea gateways for the Spanish western regions of Extremadura and Castilla and Leon, with their automative factory exports.