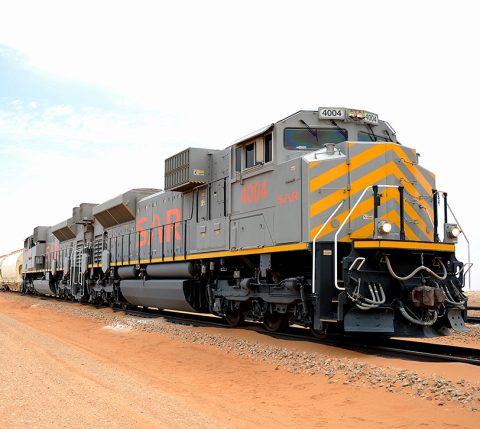 The Saudi Railways Company (SAR) has witnessed a boost in the transport of minerals via rail. Especially traffic of phosphate and bauxite mineral proved to be successful. 4.06 million tonnes were moved across the northern half of the peninsula in the first half of this year. This is a 27 per cent increase compared to the 3.21 million tonnes in the first six months of 2016.

In addition, two new rail freight services were launched this year. In May, SAR started transporting molten sulphur from the eastern city of Waset to Wa’ad Al-Shamal in the north, after it had connected this station to its network. A month later, it started transporting commercial phosphoric acid from Wa’ad Al-Shamal to Ma’aden’s refinery in Ras Al Khair. Ma’aden is an important partner of SAR.

Bashar Bin Khaled Al Malik, CEO at SAR explained that additional capacity was generated by raising the operational level of its mining freight line. “Mineral trains transported a total of 23,683,134 tonnes of phosphate, bauxite, molten sulfur and commercial phosphoric acid between May 2011 and June 2017”, he said in the Saudi Gazette.

SAR freight trains carry about 16,000 tonnes of freight per trip. They consist of three locomotives and more than 160 wagons, often equipped with the latest safety measures such as thermal insulation systems and safety valves to prevent combustion during transportation as well as heating systems in each vehicle.

The railway company was founded in 2006 with the vital task of implementing a railway project linking the north of the country with both its eastern and central regions. The first 1,392 kilometer of the corridor opened in 2011, resulting in a final railway of 2,750 kilometer.

Since its founding, SAR has implemented strategically important railway projects that transport minerals and heavy haulage all over the country. It is also responsible for the construction of the 950 kilometer Saudi Landbridge, a rail project linking Riyadh with Jeddah on the Red Sea coast. This project has been stalled for many years due to uncertainty over funding.