Freight shifts from rail to road due to Basel-Karlsruhe disruption

The interruption of railway services on the line between Basel and Karlsruhe has not been resolved and information about the recovery of the important north-south corridor is largely absent. It may take weeks, suggest local media, an assumption neither confirmed or denied by Deutsche Bahn. In the meantime, freight traffic has started shifting from rail to road or inland shipping.

On Friday the German ministry of Traffic held a round-table meeting for affected municipalities, counties and Deutsche Bahn. At this meeting, secretary of the ministry Uwe Lahl said: “Everyone involved hopes that the Rhine valley route can be used again by the end of the summer holidays in Baden-Württemberg.” The end of these holidays is on the 9th of September. “We will be providing a time schedule regarding the repair work sooner than later”, said a spokesperson of Deutsche Bahn to RailFreight.com, adding that this schedule will probably be provided this week.

As the line forms an integral part of the north-south axis connecting the ports of Rotterdam, Hamburg and Antwerp to Italy, the European rail freight industry has been largely affected. On a regular day, the route is used by an average of 200 freight trains a day, all of which got stranded as the disruptions evolved. The industry is suffering losses running into the millions of Euros per week.

Before the railway services can be recovered, repair works must be done at the affected tunnel. In a press release issued on Sunday, Deutsche Bahn’s spokesperson for the Karlsruhe-Basel project Michael Breßmer explained that the ground that shifted under the railway track must first be stabilised. “Approximately 10,500 cubic meters of concrete will be pumped into the tunnel tube at the damaged site, while approximately 5,000 cubic meters have already been applied.”

The railway company and construction consortium of Zublin and Hochtief are currently developing a timetable for the further stabilisation of the tunnel and the subsequent repair of the section of the Karlsruhe-Basel railway line. According to Deutsche Bahn, all participants in the project are working under high pressure to ensure the rapid and safe re-commissioning of the Rhine valley railway.

The standstill of rail freight last week was partly caused by the fact that alternative lines were unavailable. The usual detour routes through Germany could not be used because of ongoing construction work. On the busy railway lines via Austria to Italy residual capacity for rerouting the freight was scarce.

In the meantime, some alternatives have been made available. The German state Baden-Wuerttemberg has accepted the possibility of thinning passenger train traffic in order to allow for increased freight transport on the connection Plochingen-Tübingen-Horb at night. For its part, Deutsche Bahn has postponed construction work planned for the end of August on the Hochrhein route. Moreover, it has provided a map with possible detours. 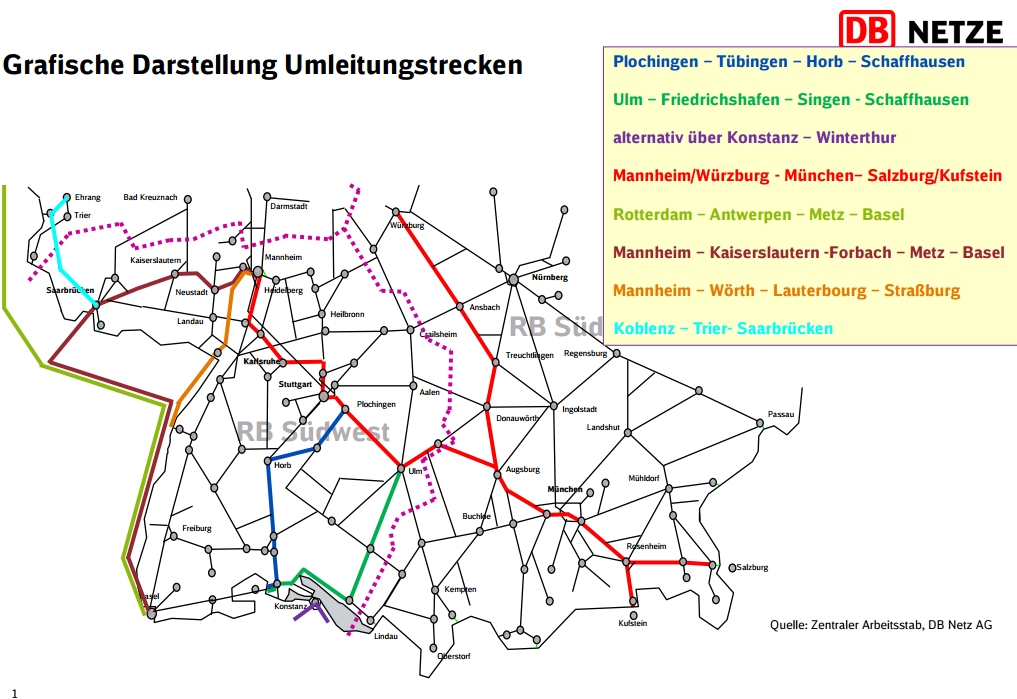 Hans-Willem Vroon of RailGood, a Dutch railway lobbyist explains that the alternatives are from from ideal, as services between Switzerland and Italy still get cancelled and operators are met with longer transit times, additional costs and length restrictions. The detour routes provided are subject to availability due to the high volumes of traffic.

“Rail and intermodal operators are working hard to enable the rerouting of trains through these low capacity alternative routes. They provide their clients with specific rail traffic updates in order to minimise the impact of the disruption and offer short term alternatives. Container shuttles are operated between northern Italy and Basel/Kehl, and locked international electric locomotives were removed from the tracks at Basel, at a cost of 10,000 Euros per piece.”

Other alternatives offered are transport by road or inland shipping. As challenges on the railway network remain, several freight operators have opted for road based solutions for urgent shipments and barge, said Vroon. “However, this has resulted in congestion at the Swiss border and packed rail terminals in the Netherlands, Switzerland and Italy. Several intermodal operators have had to issue a submission stop for containers with Switzerland or Italy as its source or destination.”

Potential loss of railway’s freight traffic to the road has been a concern of the industry, as recent years have been marked with a thrive to double the amount of freight per rail in Europe. The Swiss Federal Department of Traffic (BAV) spoke with concern about the developments. “Experience shows that a period of about two weeks can be bridged and does not lead to falling market shares of the railway sector. However, if it were longer, alternative routes may be considered. The situation is serious. Trains are packed with full containers, the transport of goods has to be reorganized, the BAV was quoted as saying in the Swiss SRF news.

The response of Deutsche Bahn has been largely criticised for a lack of communication and realistic alternatives. The network of European Railways (NEE) called for a special meeting of the Bundestags-Verkehrskoole due to the closure of the Rhine valley route. “While time is running out and every day economic losses are inflicted on a daily basis, those affected are in the dark”, CEO Ludolf Kerkeling was cited in the Badische Zeitung.

“We are greatly concerned about a qualitative and competitive guarantee of the accessibility of the European hinterland by rail for the Port of Rotterdam and the Netherlands as a whole”, the Port of Rotterdam, Royal Dutch Transport Federation (KNV) and Railgood said in a joint statement last week. “A long-term interruption is not an option, especially as the sector has witnessed unavailability of the railway network in the Netherlands (Moerdijk Bridge and Caland Bridge) and Italy (Luino) this year.

For the first article about the disruptions, read more here.